Glenn Beck: If Stewart And Colbert Aren’t Careful They Will “Go The Way Of Oprah” 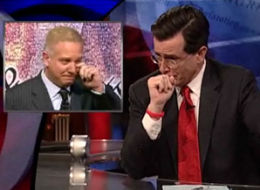 If Jon Stewart and Stephen Colbert planned their rallies with the intention of aggravating Glenn Beck enough that he would write their material for them then…mission accomplished! Beck followed up last week’s assertion Stewart and Colbert were secretly trying to “activate” young voters with today’s claim that should they continue along this path they will “go the way of Oprah.”

I don’t know how this shakes out, and I don’t claim to be the one who is left standing in the end. Here’s what I do claim. I believe that those who play these games at this point, who are not honest, who are in bed with the special interests, who are in bed with what America knows is wrong, they will go the way of Oprah Winfrey.

A lot of people say oh well Oprah cashed out she got a lot of money, oh yes, yes she did, but Oprah was losing to Judge Judy in the end. And I believe that’s not because she ate up all of her time, or her 15 minutes or 1500 hours of fame is over. I believe it happened because she got involved in politics and everything else and people didn’t like what she had to say.

I am at a real loss to figure out what Beck is talking about. Warning people they may “go the way of Oprah” is a bit like warning people all their dreams might someday come true. Is Beck warning Stewart and Colbert that if they keep on doing what they’re doing they too might find themselves a quarter century-long cultural phenomenon with a best-selling magazine, numerous books, and their own network? If Oprah can’t be considered the ultimate media success I’d be curious to hear from Beck what could be. And while it is true Judge Judy is beating her in the ratings right now (she is also beating Beck) it is strange that Beck would suggest the reason for this is because Oprah became political. The truth of the matter is that Oprah banned all political candidates and discussions from her show during the election year specifically because she had endorsed Barack Obama. A decision some felt was short-sighted once Sarah Palin came on the scene.

Anyway, point here I guess is that Stewart and Colbert have clearly got under Beck’s skin with their rallies. Though Beck does note that he felt “bad” for Colbert last week because he appeared to have been “set up” and duped into giving his testimony. Indeed. Clip below.