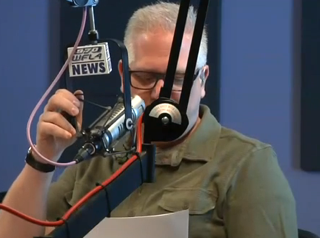 strong>Rick Santorum isn’t happy about the possibility of Matt Drudge being out to help Mitt Romney, and he’s being vocal about it. But at least one conservative who has been sympathetic to Santorum in the past is telling him to knock it off with indicting Drudge in this: Glenn Beck, who compared Drudge to William Randolph Hearst and insisted Santorum not fight with “a man who buys ink by the barrel.”

RELATED: Janet Napolitano Is Not A Fan Of How The Drudge Report Treats Her

“Don’t tug on Superman’s cape, don’t spit into the wind, and don’t pick a fight with Matt Drudge,” Beck’s co-host warned, to which Beck retorted, “don’t go to war with a man who buys ink by the barrel.” He noted that “Matt is burying Rick Santorum” already, for comments the latter made that Drudge was out to get Romney nominated. Not that the attacks weren’t being helped along by Santorum himself, who seemed to imply President Obama would be a better choice on the ballot than Romney. “That’s crazy, that’s absolutely crazy,” Beck said, though when his co-host noted that Beck himself had said something like Sen. John McCain being a worse potential president than President Obama, Beck explained that his thinking was not at all like Santorum’s. “Obama may have been a blessing in disguise because it woke us up, where it would’ve been a slow bleed to death [with McCain],” he argued, adding that he predicted “violence in the streets” this summer. “We’re running out of time, that’s the only reason McCain would have been worse in the long run,” he concluded.

The radio segment via GBTV below: