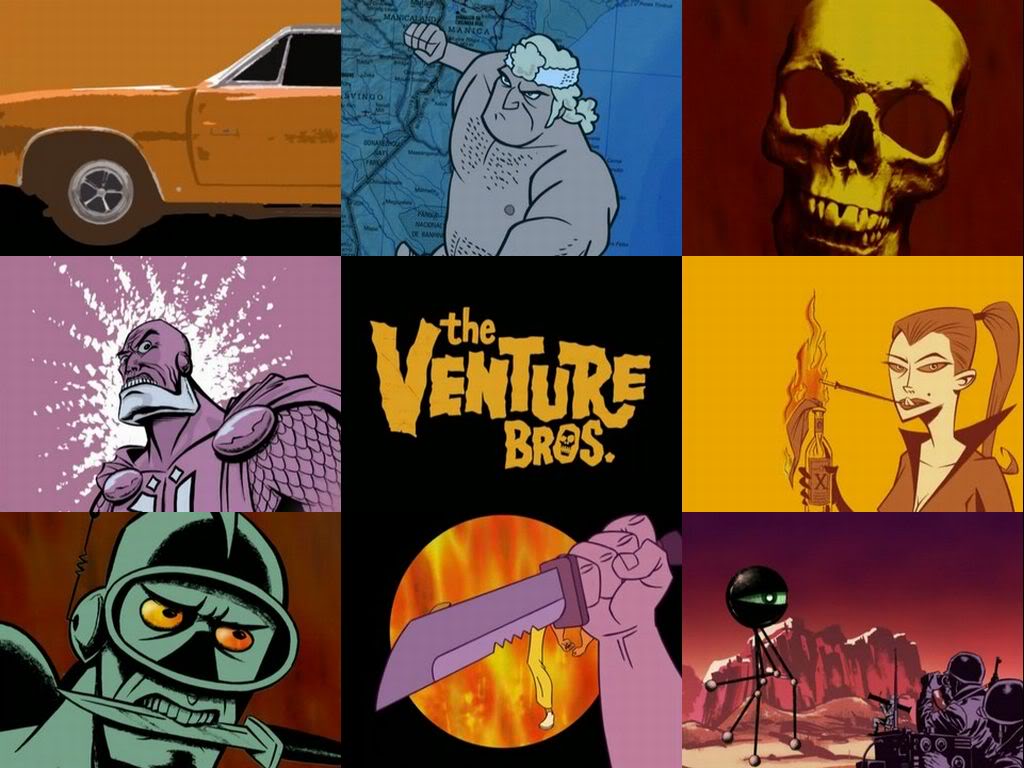 Tonight, at midnight (technically tomorrow, I know, but who’s counting) you have the opportunity to experience one of the rarest and most special events in all of geekdom.  Like an eclipse, the timing of this event is based on celestial movements, esoteric calculation and knowledge, making its coming unpredictable but all the more satisfying for the accompanying surprise.

I’m talking, of course, about the premiere of the fourth season of The Venture Bros. on the Cartoon Network’s Adult Swim. It’s been over a year coming, and as always (the previous three seasons have been strung out over more than six years), the wait has been long.  But, as always, it looks like it will have been worth it:

If you’re familiar with the show, the fact that the first new episode since August of last year is on tonight should be enough information to get you to turn off your computer right now and get yourself set in front of the TV, lest you miss a second.

If not, picture Johnny Quest, all grown up, gaunt, bald, pill-popping and broke, an abject failure stuck in a 70s groove and in the shadow of his hero-inventor-scientist father. Thats Dr. Thaddeus Venture (the real Johnny Quest has cameoed, and he is even worse off). Venture has two teenage sons, Hank and Dean (clones, actually, although whether they are clones of Venture, themselves, or someone(s) else is entirely unclear); one dresses like Buddy Holly, the other like Fred from Scooby-Doo. Throw in their secret agent, licensed to kill, heavily-mulleted bodyguard Brock Sampson (voiced by Puddy from Seinfeld/The Tick from The Tick Patrick Warburton), and their long-suffering cowardly robot H.E.L.P.eR and his meep-moops of love, and you have the Venture family. 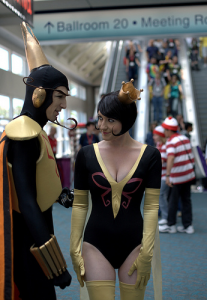 The Ventures and the highly-unionized supervillains they are constantly, often accidentally besting all live in the long shadow of the Atomic Age. The space stations, undersea bases and volcano lairs you remember from saturday morning cartoons and Roger Moore Bond films are all still there, but have been victims of neglect, and are now occupied by old men, squatters and lunatics. The superscience and superweapons are all there too, left lying around, but the batteries are dead and the manuals are missing. Venture is very much driving his dad’s car (or, to be more accurate, supersonic spyplane). Nothing is what it used to be.

Drawn in a style that is immediately evocative to anyone who grew up on (first run or rerun) 70’s cartoons, the show is all about the promise of things that never came about. It’s about a lost future.

Which all might be a bit much if the show were not the funniest thing ever written, at least for the sci-fi, cartoon, comic book in-joke crowd.  In The Venture Bros. the geek and pop culture reference come so fast and so deeply layered, that the DVD commentaries could use commentaries.  This is a show in which one of the major supervillains turned out to be David Bowie, where most of the core characters spent an entire episode in convention style Star Wars drag for no (very) good reason (Venture costumes have themselves been convention favorites for years), and in which henchmen dream of being licensed arch villains, and are bigger geeks than the fans.  The Venture Bros. is pretty much ground zero of geek culture, the place where all the streams converge.   Watching, you get the feeling that most writing sessions start somewhere along the lines of the show’s two creator/writers, Jackson Publick and Doc Hammer (not their real names), saying something along the lines of “Wouldn’t it be cool if…”  And it always is.

If the characters, settings and scenarios of The Venture Bros. all see like you’ve seen them before, it’s because you have. They have definitely seen better days, but hidden in the cynicism and meta-wit are all the things that used to make little boys and girls wonder about what is to come. Past and future clash, and melancholy hilarity ensues.

With last season’s ciffhanger, one can only hope that the new season has some big answers in store (Is Brock really gone? Are we finally going to address the fact that the Monarch and Dr. Venture are virtually identical. Is Dr. Girlfriend a dude?). The fans are anxiously awaiting them, and failed dreams have never been funnier.