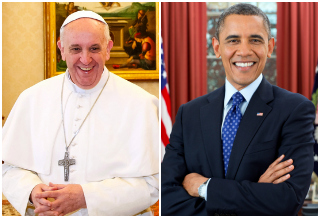 Conservatives’ uneasy relationship with Pope Francis I got even more complicated after he issued his recent apostolic exhortation that criticized the “idolatry of money.” Judge Andrew Napolitano blasted the pope for “attacking free-market capitalism.” Rush Limbaugh accused him of preaching “pure Marxism.” And now, in an op-ed for FoxNews.com, editor Adam Shaw takes things one step further by calling Pope Francis the “Catholic Church’s Obama,” and not in a positive way.

The rest of Shaw’s headline — “God help us” — belies the tone of the article, which warns that the current pope will “prove a disaster for the Catholic Church” just as President Barack Obama “has been a disappointment for America.” He tells his fellow Catholics that “should be suspicious when bastions of anti-Catholicism in the left-wing media are in love with him.” He doesn’t mention him by name, but it seems possible Shaw is referring in part to Bill Maher, who has repeatedly said he believes the new pope is an “atheist.”

“Just like Obama thought he’d won over Putin by promising a reset, Francis thinks by talking vacuously about the poor, he will be respected.”

“Like Obama, Francis is unable to see the problems that are really endangering his people.”

“Like Obama he mistakes the faithful for the enemy, the enemy for his friend, condescension for respect, socialism for justice and capitalism for tyranny.”

Shaw ends his piece by upping the stakes of the new pope’s reign and suggesting that he’s “hell-bent on a path to undo the great work of Benedict XVI and John Paul II, and to repeat critical mistakes of the past.”

Read the full column at FoxNews.com.