It’s almost as if the SpaghettiOs marketing team wanted a barrage of “Uh-Oh! SpaghettiOs” headlines, which we are more than happy to oblige. The canned spaghetti brand sent out a tweet commemorating the anniversary of the bombing of Pearl Harbor Friday night and were immediately taken to task on Twitter for what many clearly saw as a tone deaf move. 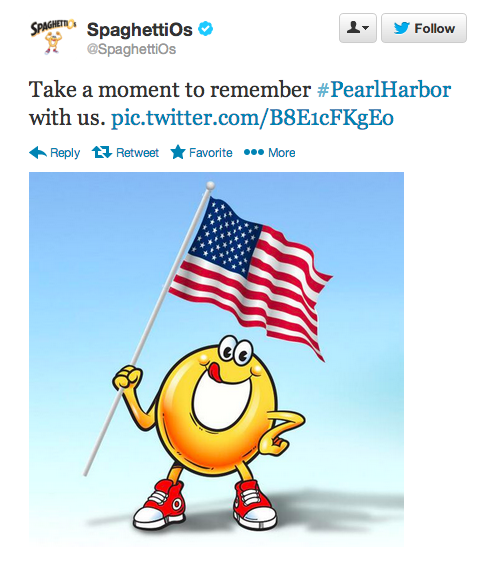 It wasn’t long before some big name media figures got in on the act:

Rolling Stone’s Tim Dickinson was one of the first journalists to notice the questionable tweet:

The fuck? "@SpaghettiOs: Take a moment to remember #PearlHarbor with us. http://t.co/uK92HC4kfk"

wtf is this RT @SpaghettiOs: Take a moment to remember #PearlHarbor with us. http://t.co/mCb46Tn98q

.@SpaghettiOs maybe sit out the next couple plays

Uh boy RT @SpaghettiOs Take a moment to remember #PearlHarbor with us. http://t.co/CZO5S1Ke02

Um… RT @SpaghettiOs: Take a moment to remember #PearlHarbor with us. http://t.co/MsK347Gikf

But some of the best reactions came from comedian Patton Oswalt:

Dear @SpaghettiOs: Genuinely afraid to scroll back & see what you Tweeted on the 50th anniversary of JFKs assassination.

"I know how we'll fix this! Somebody photoshop Mr. O shaking hands with Mandela!" — damage control at the @SpaghettiOs Twitter feed

Soon, Twitter users were sending Oswalt their own photoshopped images of the SpaghettiO witnessing other historical atrocities:

What do you think? Harmless marketing message or insensitive branding ploy?

UPDATE (5:50pm ET): The day after sending out the Pearl Harbor-themed tweet that caused an unexpectedly large uproar on Twitter, SpaghettiOs, which is owned by the Campbell Soup Company deleted the original message and issued an apology: