Alan Grayson Tells Video Ambusher ‘Kook’ To ‘Get A Life’ 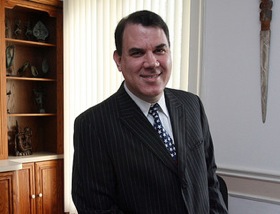 Big Government— where else?– operative Jason Mattera dug through the original House health care bill from November to find an obscure gem allocating tax dollars to “treating ‘perpetrators of child sexual abuse who are Indian or members of an Indian household.'” Outraged that the health care bill would specifically cover child molesters, he went to seek answers from Congress’ most rational and polite liberal member: Alan Grayson.

Grayson, of course, is the off-the-wall freshman rep from Florida who made a name for himself with his now-infamous “Die Quickly” posterboard presentation on the House floor, following that performance up with a gaffe repertoire so extensive Grayson has become a sort of Joe Biden for angry people. Needless to say this hallway ambush in defense of victims of Native American child molesters and moms who do not breastfeed was destined to hilarity from the start– actually, “What about getting a life?” is probably the least Mattera could have expected as a response. First the Great Moment in Alan Grayson History– a closer reading of the Native American child molester provision below.

For once, Grayson has a point here, regardless of the relative costs and benefits of the old bill. First of all, providing work-sanctioned time for women to breast-feed their children is a positive step towards eliminating gender discrimination in the workplace and giving more moms the chance to have a viable career. More importantly, the “health insurance for Native American child molesters” storyline fundamentally misrepresents the contents of the bill. Yes, the bill does allocate funding to “perpetrators of child sexual abuse who are Indian or members of an Indian household.” Here’s the part Mattera leaves out, from Section 503 of the bill:

‘(3) PURPOSES OF GRANTS- Grants may be made under this subsection for the following:

It’s money for direct outpatient treatment to help pedophiles cope with their compulsions such that they can be productive members of society once they serve their sentences for their crimes, as well as for victims to cope with the trauma. Mattera makes it sound like Grayson was using taxpayers’ dollars to buy flu shots for Native American NAMBLA members. Yes, this bill was faulty, and there is a legitimate case to be made for Grayson being completely wrong in supporting it. This is not that case.