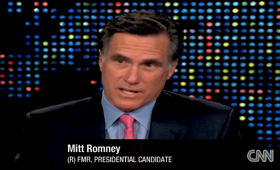 Mitt Romney is not wasting a single opportunity to make it abundantly clear to the American people that he wants Barack Obama‘s job. Last night he visited Larry King to criticize the passing of the Democrats’ health care bill, calling it a violation of the oath of office and suggesting the means should have more closely resembled the Romney’s own negotiations for universal health care in Massachusetts.

Romney had previously stated that Obama had “betrayed” his oath of office– a statement King requested clarification on. Turns out Romney meant Obama had “violate[d] the principles which he laid out in the campaign” by passing health care reform, the single biggest campaign promise Obama made in 2008. Romney was more concerned with the means than the ends, though, citing the support he received from Massachusetts Democrats for the universal health care reform legislation passed under his tenure as governor.

And his insistence on talking about his record is not the only sign Romney is deliberately framing himself in opposition to the President. People who subscribe to his newsletter also received an email blast asking for contributions to his PAC in order to fight the health care bill.

Watch the Larry King interview below: