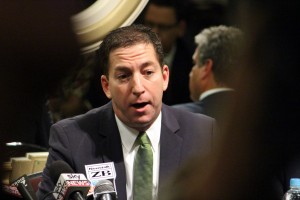 Journalist Glenn Greenwald today dismissed claims that whistleblower Edward Snowden is responsible for the Paris attacks, calling the charges “unbelievably irrational.” Greenwald said CIA officials are attempting to deflect the blame onto Snowden for failing “miserably in their job.”

“If you think about who’s actually trying to convince people to blame [Snowden], it’s current and former officials at the CIA, the NSA and other government agencies,” Greenwald told HuffPost Live, noting these officials and agencies have enormous amounts of resources and “only one mission — their mission is to find terror plots.”

“And so when they fail miserably in their job and dozens of people die, as just happened in Paris,” Greenwald continued, “of course they’re petrified that people are going to look to them and say, ‘Why did you fail in your job?'”

Monday, CIA director John Brennan blamed the Paris attacks on “a number of unauthorized disclosures and a lot of handwringing over the government’s role.” Brennan said classified leaks hindered the intelligence community’s “ability, collectively and internationally, to find these terrorists.” Brennan noted agencies “didn’t even catch a whiff of [the Paris attacks] as far as we’re to understand.”

Former CIA director James Woolsey echoed Brennan’s sentiment, telling MSNBC Snowden has “blood on his hands” for his role in the attacks. Woolsey alleged the classified information disclosed by Snowden provided Jihadists with information on how their movements were being tracked, allowing them to alter their communication strategy.

But Greenwald said officials are blaming Snowden in an act of self-preservation, insisting that in light of their failures, intelligence agencies “point the finger at other people and say, ‘Oh, don’t think about us, don’t look at us, don’t ask why we failed even though we have all this money. Look over there are Edward Snowden, it’s his fault.'”