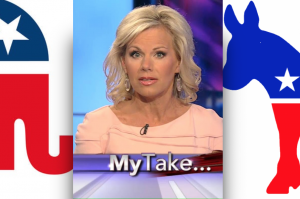 So, did you hear about Gretchen Carlson’s bombshell lawsuit against Roger Ailes?!

If you consume left-leaning news sources there is little doubt that you have. If you only frequent right-wing outlets, there is a decent chance you haven’t.

Unfortunately, this phenomenon is far more predictable and understandable than it may seem.

One of the many things that most people don’t understand about how the conservative media operates is that everyone in this racket is afraid of pissing off Matt Drudge and anyone with power at Fox News Channel. This is because if, as a “conservative” media member inherently boycotted by the “mainstream.” you can’t get your content linked on Drudge, or appear on Fox News, your career is, at best, stunted and, at worst, over.

That is why very few members of the “conservative” media had the balls to call out Drudge, Sean Hannity, Bill O’Reilly, or others at Fox News for their obvious and extreme bias towards Donald Trump during the GOP primaries, which I strongly believe effectively handed the presidency to Hillary Clinton. It is also why you should expect the coverage from the political right of the sexual harassment lawsuit of former anchor Gretchen Carlson against Fox News chief Roger Ailes to be extremely soft and sparse.

I have no idea if Carlson’s claims of outrageous behavior by Ailes are true, though a simple look at the Fox News lineup of personalities would easily lead one to presume that the culture there is certainly consistent with such behavior. It is obvious the Fox News recipe of ratings success is based on mixing young (predominantly) hot women with old white guys of unimpressive appearance. In other words, it’s not that much different than the business model of an upper-class strip club. Initial reports also indicate that others are willing to corroborate this type of culture has existed under rule of Roger Ailes.

On the other hand, it is important to remember that a lawyer can put almost anything into a lawsuit. The fact that this one comes after Carlson was no longer employed and at a point in her career where she has very limited job options and very little to lose, makes me a little bit suspicious. I also happen to believe that, in a case of the pendulum swinging too far in the other direction, our society, as has been proven quite often as of late, now tends to believe these types of claims too quickly/easily.

This was sure to be the case among the left-wing media which, in a combustible combination, automatically believes nearly every such claim they hear and also despises Roger Ailes and Fox News Channel. Their coverage of this story has been every bit as consistent with a vindictive potential rush to judgement as most of the conservative media is sure to be super cautious to preserve their own future career options.

To the surprise of absolutely no one who understands him, Matt Drudge has, as of this writing, completely ignored the Carlson’s charges (interestingly, Breitbart.com, which is usually obsessed with catering to Drudge’s whims, has not). Fox News Channel has apparently limited its reporting to one tepid online post from its clearly conflicted media reporter.

The rest of the conservative media will undoubtedly largely follow this lead and will, at most, simply acknowledge the lawsuit and quickly move along. After all, what incentive do they have to offend the most powerful entity in all of allegedly “conservative” news when they can always hide behind the (quaint) presumption that we should wait until the court system has actually adjudicated such matters.

This reality exposes two of the most loathsome and underappreciated aspects of today’s modern news media: careerism and telling customers only what they want to hear.

Quite simply, especially on the highly unregulated Internet, the number one consideration that most media people ponder before doing or promoting a story is whether or not it will likely be good or bad for them personally. It’s pathetic, but this is absolutely the truth. So if you are a conservative, writing, or even linking/tweeting, a story which will diminish your chances of working for, or even appearing on, Fox News Channel, is simply not worth the risk.

Conversely, if you are a liberal who doesn’t care about upsetting Roger Ailes, you likely go full bore with this potential scandal. You feel perfectly safe in doing so because you know darn right well that your customers have disdain for Fox News Channel, desperately want to believe the story is true, and won’t punish you at all if months, or even years, from now it all turns out to be balderdash.

Hopefully, now you understand why the news media now routinely blows so many big stories, especially of this variety. Truth, or lack thereof, is just simply not a major factor in the often disgusting sausage-making process of the modern news media.