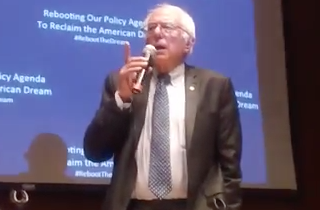 Senator Bernie Sanders is viewed by many liberals as a progressive champion on almost every single issue. But on the question of gun control, Sanders isn’t exactly on the side of many liberal advocates. Following Sandy Hook, Sanders said that, “If you passed the strongest gun control legislation tomorrow, I don’t think it will have a profound effect on the tragedies we have seen.”

So when Sanders was in Arlington yesterday, Honora Laszlo from the local chapter of Moms Demand Action for Gun Sense in America confronted him about his views on guns and, specifically, why he voted in favor of legislation to protect gun manufacturers from being sued.

Sanders touted how his home state of Vermont has “virtually no gun control” but also turns out to be “one of the safest states.” He spoke of bridging the cultural divide to fix this issue, while still touting his votes for a ban on assault weapons and background checks.

That all being said, Sanders stood by the aforementioned vote on manufacturers, saying, “If somebody has a gun, if somebody steals that gun, and they shoot somebody, do you really think it makes sense to blame the manufacturer of that weapon?… If somebody sells you a baseball bat and hits you over the head, you’re not gonna sue the baseball bat manufacturer.”

Later on, Laszlo told Al Jazeera America, “He’s using phrases that the gun extremists and the NRA use, saying things like it’s about people not liking guns… A lot of us are super Bernie Sanders supporters and we were all really disappointed that he could talk about in this way.”

Sanders recently addressed and defended his gun control views on CNN. You can watch that video here: