Handicapping Donald Trump’s VP Race: Who is the Most Likely Choice?
Opinion

Handicapping Donald Trump’s VP Race: Who is the Most Likely Choice? 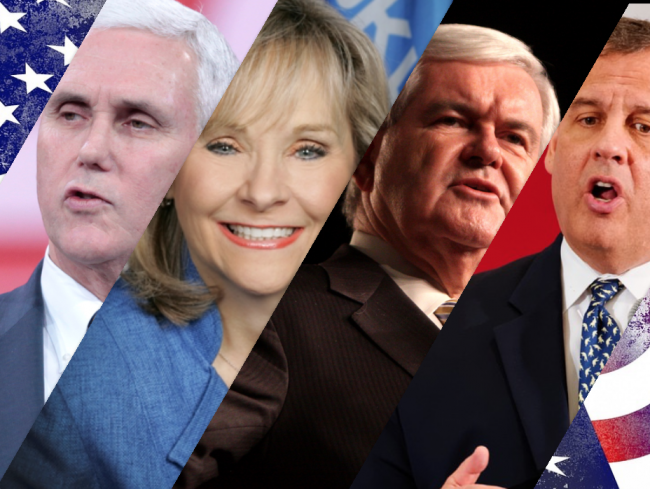 Now that we know for sure that Hillary Clinton is not going to be indicted, the next big media event on the horizon of the presidential race is Donald Trump’s choice for his vice presidential nominee.

This choice is particularly fascinating because Trump being Trump, no one seems to have a clue exactly what he will do and because, for the first time in modern history, there seem to be several legitimate candidates who simply don’t want the job.

While pondering who is likely to be chosen for the most unorthodox VP role anyone can remember, it occurred to me that part of the difficulty in predicting this outcome is the requirement of putting oneself in the mind of an unstable and possibly insane person. Even for someone who prides themselves on being an “outside the box” thinker, I found the task to be particularly difficult.

Still, I think I can at least offer some thoughts about all of the “candidates” which the conventional wisdom have deemed to be worthy of Trump’s consideration. Here they are, in order of their current betting position on the Predictit.org marketplace:

Newt Gingrich: At 37%, Newt is currently the solid betting favorite and has been getting by far the most media buzz, especially with his public “try out” this week in Ohio. If Trump’s goal is to win the election, Gingrich would be a horrible choice (assuming Trump has other legitimate options) for a multitude of reasons.

Together these two very white males would be 143 years old with six wives and a combined favorability rating of probably less than 60%. Gingrich resigned in disgrace as Speaker (in another millennium) after losing a seemingly unlosable political battle with… the Clintons. His political instincts are so decayed that, in 2012, Gingrich said he was certain that he would be the GOP nominee and (after that proved to be very false) that Mitt Romney would beat president Obama in a landslide.

While Gingrich would provide political experience and legislative knowhow, this is irrelevant unless Trump can somehow win. He brings nothing to the table as far as expanding Trump’s base. If the few Gingrich supporters still remaining in his home state of Georgia are really needed for Trump to win there, then Hillary is already a mortal lock to beat him.

I don’t believe that Newt will be Trump’s pick, but not because he’s the wrong person for the job. I just can’t see how Trump, the ultimate showman, is really going to not only make such a boring choice, but also be so incredibly obvious about it. Trump, the reality-show star (who almost never went with the obvious/proper choice on Celebrity Apprentice finales) , knows well how much the media loves surprises and at this point picking Newt would be perceived as very anti-climactic. In Trump’s world, being seen as dull or predictable is far worse than choosing the wrong person to potentially be a 70-year-old heartbeat (of a guy apparently not certain he even wants to serve) away from the presidency.

Mike Pence: In a logical world (I know), the Indiana governor would be the favorite among those who are seemingly in strong consideration. The first important quality that he possesses (unlike Iowa Senator Joni Ernst, who should have been Trump’s pick) is that it appears that he has not yet told Trump that he’s not interested in the job. His second powerful selling point is that he’s not Newt Gingrich.

Pence is a solid conservative from a region critical to Trump’s longshot hopes of winning. His presence on the ticket would reassure conservatives that there is presumably at least one adult in the room when decisions are being made. He wouldn’t be a “game changer” by any stretch, but his selection would likely end any real threat to take Trump out at the convention and probably stave off a total Hillary landslide.

Jeff Sessions: The Alabama Senator who was Trump’s earliest major endorser has stayed near the top of the Veepstakes mainly because he is one of the few qualified people who apparently is being vetted and hasn’t overly taken his name off the list. Sessions seems like the friend with whom you make the “if neither of us are married by a certain age, we’ll get hitched” deal.

As another old white guy from the Deep South, Sessions is basically Gingrich without the celebrity wattage or the heavy baggage. If everyone else falls apart he could be the last person standing and he wouldn’t do much harm, while also filling Trump’s previously stated desire (what’s the shelf life on such Trump pronouncements?) that his VP pick have senatorial experience. Sessions selection would ensure that Trump would at least win Alabama and probably even Mississippi.

Chris Christie: The New Jersey Governor, who has been more diminished by his close sycophantic relationship with Trump than anyone else, is a very unlikely to be the choice. Not only would he be a terrible selection on nearly every level (except for the Hillary “attack dog” role, which presumably will be played by Trump anyway), but the most recent reports are that Trump has so little respect for his Garden State lapdog that he is only vetting him for the position as a courtesy.

Losing out here will do little, however, to diminish Christie’s bid to make the Democratic Party Hall of Fame by being the first Republican to ever directly help ensure the election of two consecutive Democratic presidential candidates. And to think people were literally begging him at the Ronald Reagan Library to run for president just five years ago! His Trump-fuel humiliation will be a fitting end to his political career. At least he will be able to relax and finally feel free to really let himself go from a physical standpoint.

Michael Flynn: The retired Lt. General is recently popular among some on the right. His primary claim to fame is predicting the rise of ISIS and then, after being removed from his position as the head of the Defense Intelligence Agency, being a vocal critic of president Obama.

Flynn would theoretically make sense. He would give Trump credibility on the fight against terrorism and, should we again be attacked at home before November, this issue could be one of the few which makes Hillary very vulnerable against Trump. Plus, he is an obvious political “outsider” who is, unlike Trump, is fairly young.

On the downside, he is a registered Democrat, which of course would do very little to calm fears that the Republican ticket isn’t remotely conservative at all.

While I can see Trump picking Flynn if he is looking for the “Wow!” surprise factor, my gut tells me that the general has been a little too eager to be seen as a potential candidate to be the guy Trump was planning to pick out of nowhere (though if we had Twitter as a major force in mid-2008, maybe Sarah Palin would have also been tweeting about speculation regarding herself as well).

Mary Fallin: The Oklahoma Governor seems to be, other than maybe Rep. Marsha Blackburn, the last female under possible consideration (especially since Condi Rice has almost certainly turned off her phone). Since Trump has an obviously YUGE problem with female voters, this makes her inherently viable. However, she comes from one of the few states which Hillary can’t possibly win and picking her would seem to directly go against Trump’s brand of being anti-political correctness (as would picking almost any woman, other than his daughter Ivanka).

On the plus side, Fallin has exactly the type of executive and legislative experience that the logical portion of Trump’s brain would seem to favor. Unfortunately, the headlines “Trump VP is Fallin like Palin” would simply write themselves (for the record, I will always believe that the Palin pick was the best John McCain could do in 2008 and if it hadn’t been, the pro-Obama media would never have been so dead-set on destroying her).

I think there’s a decent chance she ends up as the pick.

Scott Brown: The former Massachusetts Senator is really just hanging around as an instant emergency prom date if all else fails and Trump needs someone who will look good for the photos.

Brown was an early endorser of Trump’s and fits his moderate and outsider image. But having two non-conservatives from northeastern states which Hillary can’t lose would be a sure election loser. The Veep negotiations would have to completely collapse for this to actually happen.

Wildcards: There are several others names still being mentioned on the fringes of the discussion which at least merit mention. Marco Rubio, John Kasich and Scott Walker would make sense electorally, but they would never agree to do it. Ted Cruz would heal some wounds among conservatives, but he is already looking ahead to 2020 and won’t take the job (even if Trump somehow decided a guy he nicknamed “Lyin” was the best guy for the position). Rick Santorum and Mike Huckabee both have kissed enough Trump ass for consideration and would sure up the pro-life wing of the party (assuming that still exists), but they seem like “old news” and the longest of long shots. Ben Carson would obviously be about as dramatic and entertaining choice as Trump could make (he’s the clear favorite of the SNL writers). Then of course there is always Sarah Palin… well, you can’t say she doesn’t have the experience or enough loyalty to Trump!

To me though there is only one appropriate way for this completely insane GOP primary to officially end. That would be with the surprise selection of the only Republican who literally checks all of the vice presidential boxes in this brave new Trump world.

Of course, I’m referring to Caitlyn Jenner.
—
John Ziegler is a nationally-syndicated radio talk show host and documentary filmmaker. You can follow him on Twitter at @ZigManFreud