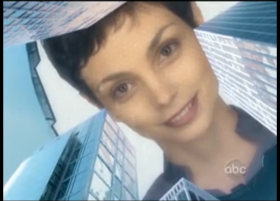 It’s Sunday — if you’re not watching football, catching up on your Saturday night or Sunday shows or doing something quaint and old-fashioned, like reading a newspaper, then maybe you want to finally get caught up on one of the biggest scandals of last week: Is Barack Obama Secretly An Evil Alien Lizard?

He might be — according to ABC’s blockbuster sci-fi series V, which had a debut of 14 million viewers last Tuesday and continues to be one of the week’s hottest topics, thanks to the controversy over whether it’s intended to be an allegory for Obamania. The producers of the show have said that’s just silly talk, but then again, the aliens do promise “hope” and “change” and “universal health care.” Hm, figuring this one out is hard!

There’s only one way to know for sure: Watch the pilot yourself, and see. You wouldn’t be the only one — it’s the most popular thing on Hulu today. Clearly the flock is coming forth to witness the truth about their leader. Or maybe they just want to see what it’s like when that FBI chick pulls back the flesh on that guy’s face and reveals the ALIEN LIZARD BENEATH! And you thought Halloween was over. The scary part has only just begun.

Or something. Whatever, it’s a fun way to spend an hour and Scott Wolf is hot, and so is Morris Chestnut (he is the only thing that made Like Mike on a continuous loop bearable on a very long flight to Australia). Watch it today, and then feel smug that you saw it before the President, who isn’t getting it until tomorrow. It’s the little things.

Related:
Pinhead Or Patriot — Is The Alien In “V” Supposed To Be Barack Obama? [Mediaite]
White House Is Unaware Of Comparisons To ABC’s Hit Show ‘V’ [Mediaite]