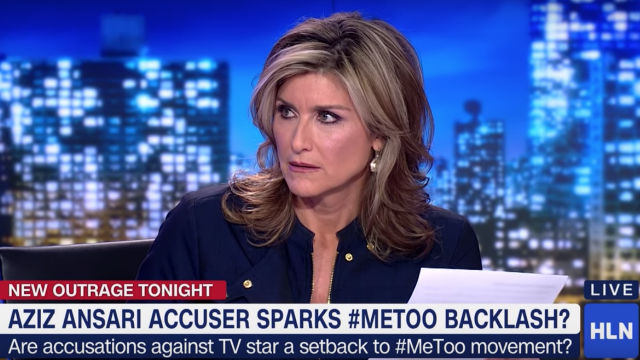 Banfield took aim at Way over an article Way wrote about a young woman’s uncomfortable and debatably harassing date with actor Aziz Ansari. In response, Way wrote an email to Banfield, part of which Banfield read on-air.

The crux of the disagreement between Banfield and Way is what kind of behavior constitutes sexual harassment. What the woman in Way’s article called “the worst night of [her] life,” Banfield simply called “a bad date” and shamed the reporter for publishing a story which, in her mind, undermined the efforts of women who were truly sexually harassed or assaulted.

After HLN asked Way to appear on the network to discuss her views, Way summarily responded in the negative, and Babe editor Amanda Ross sent Business Insider the full text of that response. In it, Way called Banfield “someone I’m certain no one under the age of 45 has ever heard of” and said she “hope[s] the ~500 RTs on the single news write-up made that burgundy lipstick bad highlights second-wave feminist has-been feel really relevant for a little while.”

“I will remember this for the rest of my career — I’m 22 and so far, not too shabby! And I will laugh the day you fold,” Way added.

Here is the full text of the response, via Business Insider:

It’s an unequivocal no from me. The way your colleague Ashleigh (?), someone I’m certain no one under the age of 45 has ever heard of, by the way, ripped into my source directly was one of the lowest, most despicable things I’ve ever seen in my entire life. Shame on her. Shame on HLN. Ashleigh could have “talked” to me. She could have “talked” to my editor or my publication. But instead, she targeted a 23-year-old woman in one of the most vulnerable moments of her life, someone she’s never f—— met before, for a little attention. I hope the ratings were worth it! I hope the ~500 RTs on the single news write-up made that burgundy lipstick bad highlights second-wave feminist has-been feel really relevant for a little while. She DISGUSTS me, and I hope when she has more distance from the moment she has enough of a conscience left to feel remotely ashamed — doubt it, but still. Must be nice to piggyback off of the fact that another woman was brave enough to speak up and add another dimension to the societal conversation about sexual assault. Grace wouldn’t know how that feels, because she struck out into this alone, because she’s the bravest person I’ve ever met. I would NEVER go on your network. I would never even watch your network. No woman my age would ever watch your network. I will remember this for the rest of my career — I’m 22 and so far, not too shabby! And I will laugh the day you fold. If you could let Ashleigh know I said this, and that she is no-holds-barred the reason, it’d be a real treat for me.