Bannon Reportedly ‘Slipped Up’ With Comment About Don Jr. Meeting During Hearing

Bannon Reportedly ‘Slipped Up’ With Comment About Don Jr. Meeting During Hearing 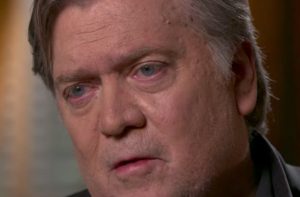 Steve Bannon might have given away one detail too many when he spoke to the House Intelligence Committee on Tuesday.

Axios is reporting that the former White House chief strategist revealed that he did communicate with several top members of the Trump campaign about Donald Trump Jr’s meeting with the Russian’s when he sat down with committee members for his hearing in regards to the Russia investigation.

“Bannon admitted that he’d had conversations with Reince Priebus, Sean Spicer and legal spokesman Mark Corallo about Don Junior’s infamous meeting with the Russians in Trump Tower in June 2016.”

The report, cited by “four sources with direct knowledge of the confidential proceedings,” said that shortly after his confession Bannon suddenly became tight-lipped when it came to any further information.

“Bannon immediately realized he’d slipped up and disclosed conversations he wasn’t supposed to discuss, because they happened while he was chief strategist in the White House,” Axios’ Jonathan Swan reported. “Throughout the rest of the session, committee members — in particular Republican Trey Gowdy and Democrat Adam Schiff — hammered Bannon over the fact that he’d mentioned those conversations but refused to discuss anything else about his time in the White House.”

In regards to Bannon’s latest statements about Don Jr. where he called the Trump Tower meeting “Treasonous,” he appeared to backtrack saying that it was instead “bad judgment.”