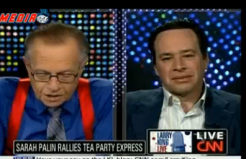 It may turn out that penning his controversial ‘Waterloo’ column was the best decision David Frum ever made, despite the fact it may have gotten him fired from his $100,000/year AEI job…or maybe because of it. Frum has certainly been making the media rounds since the column, essentially saying the GOP has signed it’s own death sentence with their lack of participation on HCR, hit the wires.

Last night Frum popped up on Larry King Live, along with Scott McClellan and John Avalon. King, not lately known for his, um, hardcore interview style, nevertheless managed to get a few interesting gems out of Frum. First question: Are you a heretic? Answer: No, I don’t think so.

At exactly this moment we have to use our heads, we have to keep our heads about us. And there is a mood of emotionalism, of reliance on pretend information that is absolutely detrimental to effective politics. And what we’re hearing right now from a lot of people are fantasies, delusions, things that can’t work, and that means that opens the way for an easy run of Democratic and Liberal success.

Emphasis mine. I’m going to assume that was a not-so-subtle reference to Sarah Palin and her death panel, repeal, politics. Whether this meme will catch on to the party at large remains to be seen. But Frum is certainly putting his best media foot forward. Also, it would seem Frum and AEI have mended fences. Video below.