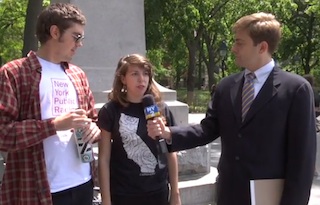 In physics, there’s something called the Observer Effect which describes the changes that any kind of phenomenon will undergo when its being observed. In television, there’s something called the Man on the Street Effect which doesn’t actually exist but, if it did, would state that any person, when observed by a television camera, will become 15-20% stupider. An adjunct of this effect, which I also just made up, is the Reporter Effect. This states that, if someone is being observed by a camera while talking to a man or woman with good hair and a microphone, they will believe every single thing they are told. And while both these theories are completely fictional, I’ve got perfectly good proof for them in this amazing video from the folks over at the humor site Jest.

“Mike Holland,” a TV reporter (actually played by naturally TV reporter-esque actor Dan Hodapp) took to the streets of New York to ask regular people about such pressing topics as President Obama firing the Senate and Germany reinvading Poland. The responses are both hilarious as fascinating as some people take the ridiculous stories at face value while others actually seem to act like they knew them. My personal favorite is the one guy who is clearly embarrassed and terrified that he’s going to seem ill-informed.

Really, I’d call this video an important interview but didn’t we all already know that Americans believe lies that people dressed like newsmen tell them? I mean, if that weren’t the case, where would cable news be?

Full Disclosure: Like Obama Boy before, this writer has worked with Hodapp in the past. Apparently while I’m sitting in an office all day watching Fox News and MSNBC, friends of mine are out making fun comedy videos. Not that I care or whatever.

Watch the video from Jest below: