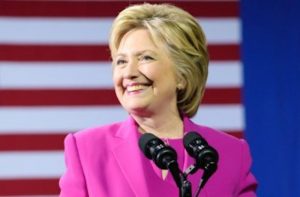 There’s a new NBC News/Wall Street Journal poll out Thursday that’s getting a lot of attention in the media, mainly because it shows former Secretary of State Hillary Clinton with a five-point lead over Republican presidential nominee Donald Trump in a four-way race, and a 48-41 advantage among likely voters in a two-way race. The poll also reveals a “good news/bad news” situation that the press is only reporting the bad side of: Hillary Clinton inexplicably remains stuck behind world-class liar Trump in the “honest and straightforward” metric, in which Hilary scores 31% and Trump scores 41%.

That’s the “bad news” for Hillary, but the good news that you;re not hearing about is that 31% represents a significant improvement in this metric from the last poll, which had Hillary at 25%, while Trump has not improved at all, and remained at 41%.

Unfortunately, this poll hasn’t released its crosstabs yet, so it’s tough to say where that positive movement is coming from, but if past pols are any indication, much of this result is due to a greater degree of unanimity among Republican and Republican-leaning voters who have been fed a steady diet of anti-Hillary smears for twenty-five years now. Much of it probably has to do with the constant noise surrounding the now-discredited email and Clinton Foundation “scandals.”

While it seems remarkable that Trump beats Hillary in this category, given the verifiable fact that Trump is triple the liar that Hillary is, according to Politifact. It’s remarkable until you remember the amount of press and hype that surrounded a certain poll just over a year ago:

Upon closer examination of data from that poll that I obtained exclusively, though, the overall responses to that poll question were actually about evenly mixed, and broke down roughly along partisan lines. What’s truly fascinating, though, is the effect that one poll has had. This narrative about Hillary Clinton’s trustworthiness isn’t new, but before this poll came out, the trend was essentially split on the question of Hillary’s honesty. We all know what’s happened since then, but here’s what else happened: according to the Internet Archive’s TV News database, examples of the words “Hillary” and “liar” increased by 3,725% in the year following that poll, versus the year before it. From August 2014 through July 2015, there were 56 examples. Since then, there have been 2,086.

It is especially encouraging, then, that Hillary is beginning to turn the tide of this narrative, but even if there’s not enough time left to undo the damage that’s already been done, there’s another piece of good news in this new poll: Hillary Clinton is beating Trump on attributes that voters weigh more heavily than the honest and straightforward question, such as “being a good commander-in-chief,” where she thrashes him 48-33. In any case, both numbers are moving in the right direction.