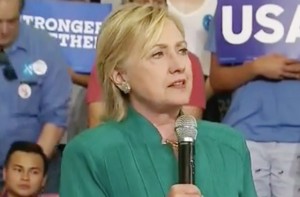 The news about Hillary Clinton‘s medical diagnosis has created a major conversation on Twitter, prompting comments of concern, well-wishes, and, in the case of some of her critics, delight.

Clinton left today’s 9/11 memorial ceremony ahead of schedule today in New York, leading to renewed speculations about her health. While the campaign initially chalked it up to being overheated, Clinton’s doctor has confirmed that she has been working under a case of pneumonia since Friday.

The development quickly became the greatest source of conversation among media figures right now. Some people appeared sympathetic as they defended Clinton:

If Clinton's team proactively announced she'd had pneumonia, it would have probably kicked off a bunch of conspiracy theories on the right.

Pneumonia is no joke. And it can be debilitating. Home stretch nightmare for any campaign.

Given how punishing the schedule is, and how many people they touch, I'm surprised presidential candidates don't get sick more often.

It shows her doing her best to grit her teeth and work hard even with pneumonia. And it's humanizing, relatable.

A smart candidate would say "I wish my opponent a speedy recovery." A sociopathic one would say "I told you so." Let's see which emerges.

Others were concerned about how this would affect the 2016 race:

Hmm, I wonder why Hillary went to the event today when her doctor advised rest. What could she have possibly been worried about?

There will be a huge groundswell of media demands for extensive Clinton medical records this week. Question is: will we demand Trump's too?

Some used the revelation to discuss whether the diagnosis is the latest instance of Clinton not being transparent with the media:

Lesson for the next 4 years: whatever the question is, never believe the first answer from the Hillary Clinton White House.

The question is why the press and public did not get notice of pneumonia diagnosis Friday https://t.co/3TkoDQ9Mw1

Campaign should have been more transparent earlier today. But this is fair perspective. Every day counts. https://t.co/jOMotouAFP

Today has been one of the worst days for reporting on this campaign I have ever seen. It is honestly embarrassing.

And then, there were those who seemed to use the news to take a shot at Clinton:

.@DRUDGE having a field day with this… pic.twitter.com/Ckt0yiqMbi

Humpty Dumpty had a great fall & all the King's horses & all the king's men said Humpty was doing just fine https://t.co/TSPbdAlPEy

"Go ahead, little girl, hug the nice old lady with pneumonia." – No one sane

When was Hillary going to let the pubic know about her diagnosis?