How Movies Let The Dogs Out: A Brief History Of The Baha Men Classic 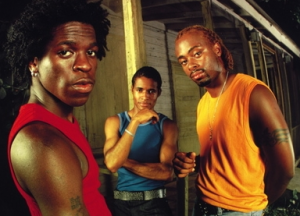 In explaining to someone recently why I had zero interest in The Grammy Awards I resorted to brevity. Rather than delve into its laughable history, questioning the nebulous governing body, or debate the diminishing import of the music industry, I instead gave a flashcard reason — The Baha Men won a Grammy in 2001 for “Who Let the Dogs Out.” No further explanation needed. Yet there is a hidden fact behind the provenance of this grating dance-floor grinder: One of the most reviled songs of the past decade came to us courtesy of the movies.

Every generation seems to have a song or two which seep into the general public consciousness and becomes pervasive, despite a general feeling of malaise attached. Think of songs like “The Lion Sleeps Tonight,” the early 80s eye-roller “Hot, Hot, Hot,” and even Lou Vega’s “Mambo Number Five.” Regardless of negligible impact on the pop charts, these titles acquire an odd acceptance in outlying arenas, and then advertisers glom onto them with enthusiasm. They do this despite widespread resistance because their ubiquity creates a shorthand connection with their target audience. For exactly the same reasoning, content-challenged films employ these offerings on the soundtrack. “Who Let the Dogs Out” followed this same formula but with a unique distinction; it actually began in the realm of cinema.

The roots of this tune come from the Caribbean, where it first was played during Carnival celebrations in the late 1990s and spread through the various islands. Eventually it was brought to the Bahamian group the Baha Men and its lengthy evolution commenced. In 2000 the group cut a version of the song and it was included on the soundtrack of The Rugrats in Paris. Our national culture has been afflicted ever since.

Once the song received attention as a result of that film, the single was released in 2000. The next phase for the song came one year later as the song’s modest popularity found it added for relevance to the tracks of the movies Rat Race and Bubble Boy. The song evolved from there, next used as a rallying call for college football teams with canine mascots, followed by some professional teams for less obvious reasons. By then, known more for its novelty than for affection, the tune moved from being a “hip” inclusion for a movie to more of a wry cultural reference. By 2002, it showed up in Men in Black 2. Failing to reach the lofty comedic stratum of its predecessor there is the whiff of desperation in this sequel, with the broad use of the talking pug Frank to deliver hoped-for comedy. This ushered in the inevitable arrival of the now over-used song as an easy gag.

The flood of uses in film ensued. Any movie with a dog scene was bidden by some unwritten Hollywood statute to have the chorus of this musical scourge blare over the soundtrack. Obviously it was heard in the Cuba Gooding Jr. embarrassment, Snow Dogs. Of course it was trotted out for the Tim Allen remake of The Shaggy Dog. The track eventually became played out. Next it migrated to ancillary entertainment, used by rote in a forgotten Disney Channel dog film Life is Ruff, and the direct-to-video sequel Open Season 2.

The next phase of evolution was long coming: the ironic reference. Not content to let such an invasive song lie dormant it now became a punchline. Most notable was in The Hangover where the blissfully unaware Allen used it as motivational party line, and director Todd Phillips punctuated the scene for a brief moment of mirth.

The level of infamy for this title has been chronicled hence. As numerous outlets looked into their take on horrible songs, The Baha Men placed impressively and consistently. On a Rolling Stone list of “Most Annoying Songs” it ranked #3. As AOL Radio compiled the “Worst 100 Songs Ever” it was deemed the runner-up, and as Spinner tabulated their 20 Worst Songs Ever, it logged the top spot.

Normally this would be enough to ring the death knell of an offering. Such widespread and consistent disdain for a song should indicate not just resistance but outward hostility. Including this track in any level of artistic content should become evidence of both a lack of creativity and desperation for validation. So when Marmaduke arrived and most suspected a stillborn production, they were proven correct by that movie’s repeated use of this song. Therefore, it was more than fitting to see this derided ditty return, ten years later, from where it came.

Hollywood received what it deserved.