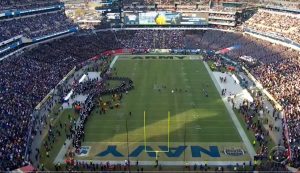 On Friday afternoon, when a brief government shutdown was possible because of a Senate dispute over coalminer benefits, Senator John McCain made it clear that the Army-Navy game, set for Saturday afternoon, would not be impacted by any procedural tactics.

“I promise you they’re not canceling that game. Pigs will fly before that game is canceled,” McCain said, according to Politico.

Indeed, the dispute was resolved, and the game is on: Army vs. Navy, the 119th edition.

It seemed, two weeks ago, that Army, which has lost 14 straight to Navy, might have even less of a chance than usual this year. Navy was ranked in the top 25, had won their division in the American Athletic Conference, and even had a chance to earn a berth in a New Year’s Six Bowl game. But in the AAC Championship game against Temple, star quarterback Will Worth injured his foot, and the Midshipmen were routed 34-10. So Navy not only enters off of a brutal loss, but they’ll be forced to start inexperienced sophomore Zach Abey under center.

As for Army, the Black Knights are 6-5 and have a chance to post their first winning season since 2010. They even qualified for a bowl game, the Dec. 27 Heart of Dallas bowl, where they will take on North Texas. The Black Knights have posted a couple of notable road wins this year, winning at Temple and at Wake Forest. The injuries to the Navy side give Army a chance to snap their lengthy losing streak in this classic rivalry.

Two other items of note: President-elect Donald Trump is scheduled to attend the contest on Saturday afternoon in Baltimore.

As a show of support for our Armed Forces, I will be going to The Army-Navy Game today. Looking forward to it, should be fun!

And CBS play-by-play announcer Verne Lundquist will call his final college football game for the network after 17 years behind the mic.

Kickoff is at 3:00 p.m. ET. CBS will broadcast the game live. Lundquist and Gary Danielson have the call. CBS Sports will also stream the action on its website, as well as its app. The CBS Sports app can be downloaded via the Apple app store, the Google Play store, and the Windows store.