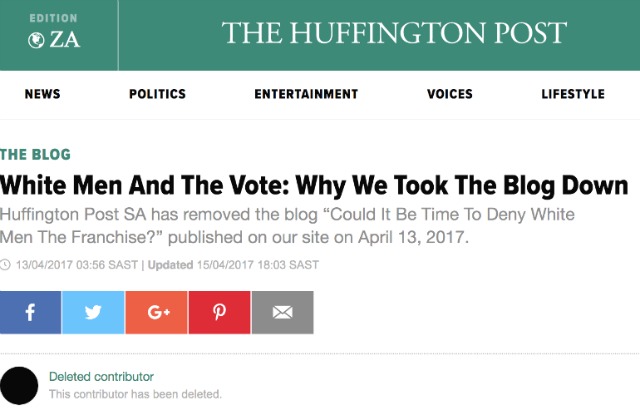 Huffington Post South Africa has taken down a piece from their website titled “Could It Be Time To Deny White Men The Franchise?” because the author “appears not to exist.”

You can still read the original post here, which makes an argument about how “if white men no longer had the vote, the progressive cause would be strengthened.”

Here’s part of the argument:

It would not be necessary to deny white men indefinitely – the denial of the vote to white men for 20 years (just less than a generation) would go some way to seeing a decline in the influence of reactionary and neo-liberal ideology in the world. The influence of reckless white males were one of the primary reasons that led to the Great Recession which began in 2008. This would also strike a blow against toxic white masculinity, one that is long needed.

The post was written by someone named Shelley Garland.

Huffington Post SA has removed the blog “Could It Be Time To Deny White Men The Franchise?” published on our Voices section on April 13, 2017.

We have done this because the blog submission from an individual who called herself Shelley Garland, who claimed to be an MA student at UCT, cannot be traced and appears not to exist.

Editor-in-chief Verashni Pillay says that they have “immediately bolstered and strengthened our blogging procedures that, until now, have operated on the basis of open communication and good faith.”