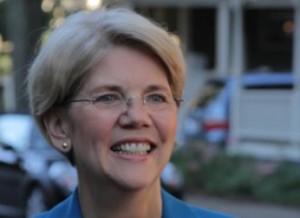 Massachusetts candidate for US Senate (and fundraising juggernaut) Elizabeth Warren has, once again, been unwittingly drawn into a silly nontroversy, with another innocuous attempt at self-effacement. This time, she referenced her Oklahoma roots by telling an interviewer that she’s “going for the hick vote, here.”

The remark prompted Mass. GOP spokesman Tim Buckley to demand “an explanation about just who Professor Warren was referring to when she spoke of winning the ‘hick vote.’”

He went on to ask exactly how Warren expects to divine the intentions of a road-crossing chicken, and challenged her to identify this “man from Nantucket” by name. I’m  just kidding about those last two, but the answer to all three is the same: it was a joke!

Warren’s remarks, made on a local podcast, were in response to attempts by her opponents, including Sen. Scott Brown, to paint her as both a Harvard elitist and an unsophisticated rube. ““I’m a new category, an elite hick,” she told host Mike Ball, paraphrasing the criticism, then went on to explain, at length, that the choice Americans face “transcends being a hick, and “transcends being a fancy-pants professor.”

Much later in the podcast, Ball called back to the “hick” remarks, explaining that “as a fellow person who was born in Oklahoma and raised in West Virginia, I’ve been called a hick myself a lot. I’ve got to say I’d love to see you in office.”

Warren joked, “I’m going for the hick vote here,” then suggested, “Maybe we could start wearing stickers that say ‘Hicks for Elizabeth.’ Could we do that?”

“Professor Warren’s insulting use of the word ‘hick’ offers a revealing prism into her elitist and arrogant worldview. Massachusetts voters deserve an explanation about just who Professor Warren was referring to when she spoke of winning the ‘hick vote.’”

In a literal sense, Warren was referring to herself and Mike Ball, and perhaps to any other members of the Okie-to-Massachusetts transplant demographic, but more broadly, to anyone who has been written off with a dismissive label like “hick.”

A spokesman for Elizabeth Warren’s campaign told Mediaite, ““Elizabeth gave a self deprecating answer when an interviewer said that like her, he was from Oklahoma and often called a hick. It was a lighthearted moment in an otherwise serious conversation about Elizabeth’s fight for middle class families.”

That’s all well and good, but I expect we’ll soon be hearing from some outraged professors, sporting trousers with varying degrees of festoonment.

As the star of several populist viral videos, this podcast is yet another example of Warren making news outside of the traditional media pipeline, which is a good sign for the candidate. Although she’s off to a huge fundraising start, incumbent Scott Brown still has a considerably larger war chest accumulated, so all of this free press is a bonus for her.