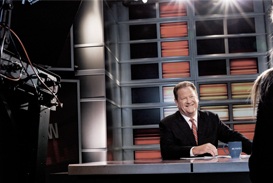 While he also speaks about the events that led to his conversion from conservative to liberal firebrand, and his post-Katrina efforts to help New Orleans residents, his recounting of that high school experience is particularly revealing.

Asked to recount the story, here’s what Schultz had to say:

TALKERS: You were once a professional football player which, of course, is competitive and requires courage and strategy. And I understand, I just found this out recently, that in 1970 you had your own Rosa Parks-type experience. Could you tell us about it?

Ed Schultz: I guess I’ve never had anybody put it to me that way. I guess it was. I grew up in Norfolk, Virginia, went to high school and it was a time of forced busing for racial equality and I was the captain of a predominantly black football team. We had a great year. We were undefeated and in the playoffs and we always traveled on one bus to all the games. But when we went to the playoffs, for some reason, that night they showed up with two yellow buses and all the white kids got on one bus and all the black players got on another bus. I was the quarterback of the team and traditionally the last one out of the locker room. I got out and there were two buses and our team just got segregated after the great year that we had. I got on the bus with the brothers. I got on with the black players because I knew it was the right thing to do. My family was very involved with current events and watching the news at the dinner table –– my mother was a high school English teacher and we always paid attention to current events. In junior high and high school integration was a big story. When I came out of that locker room I was just shocked. I got on the bus with the black players but it affected our team that night. We didn’t play well and we lost. And I honestly believe that bus ride had everything to do with how poorly we played which was so uncharacteristic of our team. It was an eye-opener for me. No matter how good we try to make things right there are always going to be those divisions. I didn’t want to be a part of division, I wanted to be a part of union. I wanted to be a part of making things better and even at 18 years old maybe that was a little bit too pure at the time but that was my instinct.

Aside from the obvious emotional heft, the story is affecting in the realism of the ending: Schultz’s team loses. In Hollywood, it never would have gone down that way, but in real life, it takes more than a well-intentioned gesture to make a difference.

Schultz also embeds some tough criticism of President Obama in his response to a question about winning the Paul Wellstone Award: (emphasis mine)

Schultz doesn’t do a whole lot of press (perhaps, being on the air four hours a day, he wonders what’s left to ask?), so the Talkers interview is a rare look at the still-rising liberal star. Read the full interview here.