Reexamining The Death Penalty: How Much Doubt Is Reasonable To Stay An Execution? 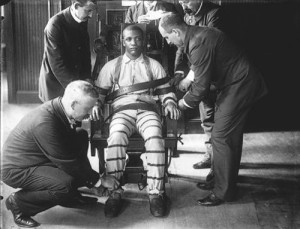 How certain of someone’s guilt do we need to be before we put them to death?

In eight days, the state of Georgia is slated to execute Troy Davis, convicted of killing Mark Allen MacPhail, a Savannah police officer. It’s the fourth time Davis has been slated to die. Each of the prior three times, legal issues have resulted in stays or delays. The Supreme Court has repeatedly heard – and declined to hear – arguments on the case. In the fall of 2008, Davis came within two hours of being put to death.

On August 19, 1989, officer MacPhail, while off-duty, was shot and killed while trying to break up a fight in a Burger King parking lot. A number of witnesses told the jury at trial that Davis had confessed; Davis himself admitted being at the scene.

But after his conviction, seven of the nine witnesses recanted their statements, some saying it came under duress. There was a lack of physical evidence linking Davis to the gun that fired the fatal shot. A juror expressed remorse at the death sentence; a number of prominent individuals wrote letters demanding parole or commutation.

My goal here is not to re-try the case. None of us has seen all of the evidence or heard cross-examination; we have not been instructed in the letter of the law. My goal is, instead, to consider the question asked at the outset.

It seems clear that a supporter of the death penalty would deem certain guilt – say, a guy caught on video, with a written confession, with multiple witnesses – sufficient. Likewise, clear innocence – the man was caught on video in another state – would rule out the punishment. But where along the line between the two do the scales tip?

The standard applied for determining guilt in a jury trial is familiar – guilt must be established beyond a reasonable doubt. If you have any rational, reasonable cause to think that the person might not have committed the crime, you must find him not guilty. It’s an elegantly interpretive standard, one that asks an individual to make a judgment call.

But that standard doesn’t apply outside of the courtroom. In a jury trial, certain evidence may be deemed inadmissible – with good cause or not – which might shift the level of doubt held by even a close observer. New evidence might appear, such as the recanted testimony in the Davis case.

In many states, a Governor is empowered to commute a death sentence. This is powerful: a Governor is not bound to follow the letter of the law (chains of evidence, assessments of the decision-making of lower court judges, etc.). The Governor can make a decision based on evidence or feelings that the state supreme court cannot. In the case of Davis, even the United States Supreme Court demanded he “clearly establish his innocence”. But for a Governor, it’s that person’s decision. In the most literal sense, a Governor is asked to make a determination on what is just.

The Governor has multiple constituencies vying for his attention. There are the family and friends of the victim and the same group for the convicted person. There are the voters of the state; there is law enforcement. Each has a reason for advocating an outcome.

It’s impossible for an elected official to take politics out of the decision. He or she will be judged based on what is done – and it’s often the side that advocates execution that is more politically powerful. (In fact, a common criticism of the death penalty is that it is disproportionately applied to people of color and the poor. Were Troy Davis the son of Ted Turner, it’s hard to imagine he’d be in the same position.) These are the considerations that muddy the waters for a Governor; though the chances of recidivism are minuscule for someone with a life sentence, it’s a difficult, nuanced position to defend on the campaign trail.

But let’s set politics aside, clear the waters. For that Governor, faced with that decision: how much innocence is enough to spare a life?

Reasonable doubt? Any possible gap in demonstrable proof? What if new evidence could come to light? Or new technology. 139 people have had death sentences overturned in America, complete exoneration – mostly through DNA evidence. What if a new, future technology might even crack open the door of doubt? Is that enough innocence?

In the Troy Davis case, it’s not up to Governor Nathan Deal. Instead, it falls on the State Board of Pardons and Paroles, an executive branch agency empowered to grant clemency. The Board has a process it follows to decide whether or not to commute a sentence; the five-person panel then votes. A majority vote, three ayes, can commute the sentence. Likewise, three nays can uphold it.

So what of those two votes for commutation? Is the number we’ve been looking three-in-five odds? 60%? A criminal must be 60% guilty in order to be put to death? Can be no more than 40% innocent?

Life is black and white, on or off. It seems improper to deal with fractions and meddle in the gray when assessing whether or not to take that life away.

We tend to think of death penalty as the execution of a murderer, a criminal. What if we think of it as the potential execution of someone who is innocent?

Where is that line of execution drawn? And who do we empower to draw it?