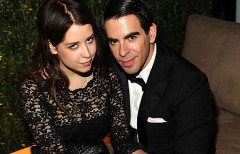 Here is what passes for chivalry in the 2.0 age. Eli Roth, horror flick director, Tarantino star, and one-time Mediaite columnist, has taken to MySpace to defend his girlfriend Peaches Geldof, daughter of Sir Bob, from last month’s Reddit/Gawker scandal which saw naked pictures of the 21 year old, taken during a “drug fueled” night of partying last November, post posted to the Internet courtesy of her companion ‘Big Ben.’ Roth takes his criticism to the source. Literally. Here is the letter Roth posted addressed to Big Ben’s mother.

You don’t know me, but my name is Eli Roth, and I am the boyfriend of a young woman named Peaches Geldof. Her name might ring a bell, as your son Ben recently wrote a sick, hurtful story about her that is now causing tremendous damage. If you do know Peaches, like many in America you probably know her from the gossip blogs as the daughter of Sir Bob Geldof. However, in the United Kingdom people have been reading her newspaper columns and magazine articles since the time she began writing professionally at age 13. If you lived in England you’d also know her as not just a television presenter and fashion model, but you might have seen one of her three documentaries that aired on British television, the first of which she produced when she was 15 years old. I realize this might be difficult for you to comprehend, as your 23 year old son Ben was expelled from Drew University and so far as I can tell makes a living as an “artist”, but Peaches accomplished all of this before the age of 21. Perhaps a need for attention at any cost drove Ben to write such a destructive story, but upon closer examination, I believe there is something much darker at work with your son…..

Your son Ben appears to have a deeply troubled past with women, as internet searches show he was accused of holding a girl hostage at knifepoint in a dorm room, and was then later was accused of witness tampering in the ensuing trial. Whether you choose to believe it or not, your son Ben is a liar. There are photos of Ben drunk with Peaches, and he concocted a racy story which involved them using heroin. I know you are quite familiar with how young adults can be irresponsible when alcohol is involved, as your son Jacob, who is the same age as Peaches, was once arrested for public drunkenness (see #3148). Ben posted his heroin-fueled sex story on a message board and then posted topless photos of them together as “proof,” and instantly his story was everywhere.

At first Peaches and I thought nothing of the posting – the story was simply too preposterous. Your son’s fairy tale culminates with him dazed and vomiting in a sauna at the Scientology Celebrity center, a place notoriously so high security that no non-member would ever be admitted and left alone, let alone a strung out one. But look closely at the specifics of your son’s story: he did not pick a drug associated with sex like ecstasy or cocaine, he chose heroin. Why? Because not only has Peaches openly talked about drug use in her past, her mother tragically died from a heroin overdose when Peaches was young. Ben’s story becomes much more salacious if he paints Peaches as heading down a similar path. Peaches does not have a squeaky clean image by any means, in fact, she’s known for being brutally honest and open about her past mistakes in life. But she has also worked hard to grow up and overcome her troubled past, and is now drug free. Your son took details from Peaches teenage tabloid stories to make the story more believable, no matter how contrary they are to who she is today. Ben used the most painful events from someone’s past to make himself famous, and it worked. It’s sociopathic. Imagine if I had a photo of Ben with a knife next to a girl and after some internet research posted a story that he had held yet another girl hostage at knifepoint? What if there were new photos of your son Jacob drunk and someone made up a story about how he was drunk in public again, and the press painted him as an alcoholic? Peaches has worked hard to put her mistakes behind her and show she has grown up, and was doing quite well until this insane story came along, and the British press spun it into front page news. Peaches lawyer immediately came out with a statement categorically denying the heroin accusations, but it was too late, your son had already done the damage.

Your son did not just post a false drug story on a message board. He took a bright, intelligent, incredibly creative young writer and damaged her ability to work until people forget about this or dismiss it as nonsense. Not only has your son’s horrible lies now painted Peaches as “dangerous” to many who would potentially hire her, but companies like Ultimo Underwear are using this “scandal” as a reason to fire Peaches by saying that she is not a role model for young girls. And for what? Some psychotic story your son made up that people were all too ready to believe because it fell in line with stories from the past. Stories your son clearly read before he made up that post. He knew exactly what he was writing, the details were far too calculated. And that made it all the more destructive. These stories also send a dangerous message to anyone who has ever made a mistake, that no matter how you change someone can make up a sick story about you and everyone will revert to the worst image of your past.

The instantaneous connectivity of the internet spread this venom to newspapers all over the world, so now I am hoping this letter reaches you through the same medium. The night Ben posted the photos a mutual acquaintance called him and asked him to take down the photos and the story, and Ben’s response was “Fuck off,” so clearly he was not bothered by what he did at the time. Hopefully someone will notify you through by your Facebook page, your son Jacob’s Facebook page, through your daughter Gabriella at Tulane, your twitter page, Jacob’s twitter page, or one of your Twitter followers, and my words will ultimately reach you. I would send a copy to your at your Palo Alto address that I got from Jacob’s arrest on the internet, but I don’t know if you reside at that residence anymore. I would even ask the blogs and newspapers who were more than happy to run rampant with Ben’s insane story to reprint my letter in its entirety in the hopes you see it. Maybe by examining the person your son hurt, he would attempt to be more like Peaches and become an artist beyond hanging himself from meat hooks. Ben writes such creative fiction, he could ask Peaches how she got her book deal. Or perhaps like Peaches he could write for newspapers and magazines published around the globe, although even that’s getting difficult for Peaches now that your son has painted her as trouble with a hurtful story fabricated around details from a painful past. I hope you or your other children can help Ben realize the damage he has caused to (yet another?) young woman, and teach him how to behave like a human being. Although considering Ben’s past history and recent actions, your record as a mother appears spotty at best. Perhaps you are the source of his anger, in which case I hope you both are able to find happiness without damaging other people’s lives.

I’m not sure how much there is to add here. The obvious thing to say would be that Peaches Geldof’s illustrious career as a child newspaper columnist and magazine writer likely had more than a little to do with her, um, family history and connections. And that I suspect Eli Roth is going to very much be wishing he hadn’t hit that post button sometime in the not-too-distant future. But whatever. It’s springtime, the season for young love, so let’s focus on the positive and just say, what tabloid hound, troubled daughter of a celebrity wouldn’t want their handsome, successful boyfriend posting a letter like this in their defense. It’s the stuff 15 year-old-dreams are made of. I mean seriously, the best most of us can expect is a nice tweet-out here and there.