Jeb Bush Hires Hipster.com Co-Founder Because He’s Cool Like That

Jeb Bush Hires Hipster.com Co-Founder Because He’s Cool Like That 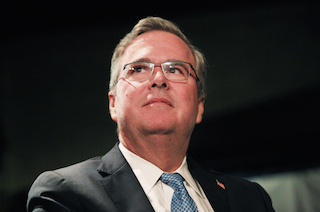 Jeb Bush just took the next big step on his path to becoming a presidential candidate, hiring as his chief technology officer Ethan Czahor, one of the co-founders of the short-lived photo-sharing site Hipster.com. According to Time’s Zeke Miller, Czahor has already started working for the former Florida governor, creating the JebSpeech.com site ahead of Bush’s Detroit speech last week.

Czahor, who will oversee the digital operations of Bush’s political action committee, Right to Rise, co-founded Hipster.com in 2011. The site started as a local Q&A service, but then morphed into an app for creating digital postcards. One year later, it was acquired by AOL, which appears to have promptly killed the service with the URL now redirecting to AOL’s home page.

As Time revealed, Czahor hid this code in the JebSpeech.com page as a way to reach out to any fellow conservative coders out there who want work on the “greatest political tech stack ever created.”

Miller cites Czahor’s LinkedIn profile as the source of his scoop, but as of this writing, there is no mention of Bush or his Super PAC on that page. He does have a Twitter account, but has only posted two tweets in the last year.

UPDATE — 6:22 p.m. ET: One of the reasons Czahor’s Twitter account appears so sparse Monday is that he reportedly deleted dozens of tweets at Bush’s request, including several that included references to “sluts” and gay men.

He addressed the edits in a message this afternoon:

i deleted some old jokes i made years ago that i no longer find funny or appropriate. #learning #maturing