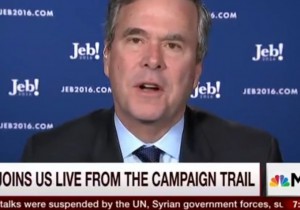 Looks like Marcomentum™ isn’t all fun and games. Since Monday’s “stunning” third place finish in the Iowa caucuses, Republican presidential contender and Florida Senator Marco Rubio has been subjected to indignities that would offend the sensibilities of even the most self-effacing circus chihuahua.

Rubio has faced mockery over his overly-triumphant Bronze Medal speech, taken “bubble boy” insults from a guy who barely outpolls stuffed manicotti, and watch freshly-minted endorser Rick Santorum completely faceplant when asked to name just one Rubio accomplishment. Now, he’s even losing chunks of flesh to a guy who has to beg his own audiences for applause.

Former Florida Governor Jeb Bush returned to the scene of Santorum’s crime Friday morning wearing a bib, and Morning Joe host Joe Scarborough served him a plate of Rubio sashimi by asking him to comment on the thin list of “accomplishments” the Rubio campaign sent him after Santorum couldn’t name any. That list, according to a Scarborough producer, consisted of “V.A. accountability reform, Obamacare bailout, Girls Count Act, Venezuela sanctions, and Hezbollah sanctions.”

That’s a pretty meager tapas plate to begin with, but by the time Bush dug in like a Berkshire pig with a tapeworm, there was nothing left:

SCARBOROUGH: Marco Rubio was in the news yesterday because we had Rick Santorum on who couldn’t list an accomplishment that — that he had. First of all, I want to ask you and I’ll ask you two questions since we have a slight delay here. What do you think of Marco Rubio’s list of accomplishments that his campaign got out after Rick Santorum couldn’t name one? And give us your list.

J. BUSH: Well, his list of fighting for additional sanctions for Hezbollah, which was done by unanimous consent — unanimously, literally, where he didn’t show up to vote, that was one of them.

J. BUSH: I think he passed a bill…

J. BUSH: … with Jeanne Shaheen that seemed pretty nice. That’s his one bill that’s became law. And that’s about it. Oh, the risk corridor for Obamacare that — that actual sponsors of the amendment claim, correctly so, that they did it, and that was confirmed by the New York Times after they misreported it. So his record of accomplishment is slim.

He was speaker of the House and he did a fine job there. But every speaker before him and after him but one that worked with both of us is supporting me

Now, Jeb isn’t being entirely fair to Rubio about the Hezbollah sanctions, he did sponsor the bill, so he had to have shown up at some point along the way, but on the so-called “Obamacare bailout,” he’s correct, Rubio got busted for that right on Fox News Sunday.

The worst part of this, though, isn’t that Rubio is taking hits, it’s that he’s taking hits from this guy? Whatever bump Rubio received coming out of Iowa, the rest of his pals at the bottom of the pack are holding onto his ankles for dear life to try and keep him down there with them.

The Rubio campaign also needs to do a better job of selling their candidate’s accomplishments, instead of cursing the poor unfortunate messenger. According to Politico, they had some choice words for Santorum:

“He took a s—,” one Rubio insider said of Santorum’s appearance.

Hey, maybe they should add that to the list of Rubio’s accomplishments, he had to have done it at least once!