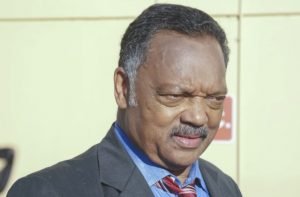 Reverend Jesse Jackson thinks that President Obama should issue a pardon for Hillary Clinton in the name of healing the country before Donald Trump takes office.

According to the Detroit Free Press, Jackson made the remarks when he spoke at the University of Michigan today. The campus has been one of many that has seen student protests in the wake of Trump’s election, and Jackson acknowledged the “fear” people are feeling afterwards.

But Jackson also said this:

“It would be a monumental moral mistake to pursue the indictment of Hillary Clinton… President Ford said we don’t need [Nixon] for trophy. We need to move on. President Nixon wasn’t convicted of a crime. He didn’t apply for a pardon. (Ford) did it because he thought it would be best for the country.

“Hillary Clinton has not been tried, but there are those who want to drag her for the next three years. It will not stop until they find a reason to put her in jail. That would be a travesty.”

To be clear, the report says that Jackson didn’t go so far as to say he thinks Clinton did anything wrong. But he thinks a pardon would be the right thing to do.

Jackson made similar remarks earlier this week to the Cincinnati Enquirer editorial board:

Jackson, 75, called on President Barack Obama to pardon Donald Trump’s opponent, Hillary Clinton, before the president-elect could appoint a special prosecutor in January and further divide the country.