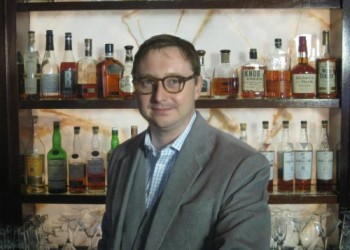 John Hodgman is an expert. That’s what his books are about, that’s what he does on the Daily Show, that, at least, is what he thinks he is in those ubiquitous Mac vs. PC ads, which if they were a teen comedy would no doubt end up with him scoring the hot girl. It’s not a bit, either — he comes by his eggheadedness honestly, having made a name for himself long ago with the witty humor that has now crystallized into what the kids are calling “nerd chic.” Jon Stewart recognized Hodgman as a comedic goldmine in late 2005 when Hodgman was a guest on the Daily Show to promote The Areas of my Expertise; in January 2006, Hodgman was back on, this time as an expert — and his career as “A Famous Minor Television Personality” was born. Since then he’s — well, you have a TV, I know you’ve seen one of those Mac ads, since by my count there have been a whopping FORTY of them since 2006. He’s also voiceover-hosted the Emmys (!), had a bit part in Battlestar Galactica (!!), and gotten President Obama to do a Vulcan Hand Salute (!!!!!!!). He also, as it turns out, is a whiz behind the bar, which I found out while interviewing him for “Have A Drink With” at the Daily Beast (and where I took this rather awesome photo). We’ve got those videos for you below, but first Hodgman very kindly answered our questions — appropriately wide-ranging as befits an expert of his stature — about Presidential nerdity, his bromance with Justin Long, how Yalies make love and the recently-released paperback edition of his book More Information Than You Require. All this and more in the latest installment of 5QQ – Five Quick Questions.

I check Twitter for news of political import and updates on sonic booms. I listen to WNYC and the BBC for general local and world news and also vocal training. The Onion AV club is my culture pages. I then do a few laps around the blogs, especially to see if Bill Scher at liberaloasis.com or David Rees at TRUE/SLANT is saying anything new. Then I read the comics at www.joshreads.com.

You are cruel to make me make such a choice. Our culture requires both, as they are both works of genius. Only because Venture Bros. continues to produce new material, and has so far not been on the cover of TV Guide, I will say GO TEAM VENTURE. Listen for me as Dale Hale in an upcoming episode.

I will always be a CHINS man, as I represented that book 1000 years ago when I was a professional literary agent. Though the audiobook of MAKE LOVE is genius.

Being the Voice of the Emmys or Getting the Commander in Chief to Do The Vulcan Hand Salute?

As much as I think the NPH is the ENTERTAINER OF OUR TIMES (and a far better magician than the President), I have to go with sharing a Vulcan moment with the President in DC, for sheer implausibility.

I do not think the president is a lizard alien, because I watched him as he was eating dinner, and he was not eating human children. Instead, it was some kind of exotic food called “beef wellington.” I suppose it is the native cuisine of whatever other country he is from.

Justin Long’s Ted Levine impersonation. If you meet him, ask him to do it. Justin is truly one of the funniest people I know.

It is an incredible time for writers and trees. Via internets, you will get more stories from a wider range of sources than ever before. But I do hope that the NY Times manages to survive. We need professional, edited newsgathering, or else all blogs die. And I need Jonny Miles to tell me where to drink.

Bonus question: Have you ever made love the Bruce Campbell way?

In a cabin in the woods while fighting zombies? Yes. It is a graduation requirement at Yale.

>>>NEXT: That is not all! We’ve got our video interview with Hodgman for the Daily Beast coming up!