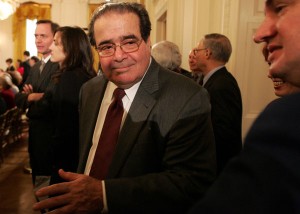 The debate surrounding Arizona’s immigration law is a heated one — and on Wednesday, Justice Antonin Scalia added to the strong sentiments swirling in the case. Questioning U.S. Solicitor General Donald Verrilli, Scalia asked what’s wrong with states enforcing federal law, adding, “There is a federal law against robbing federal banks. Can it be made a state crime to rob those banks?”

According to TPM, “mocked the Obama administration’s argument that S.B. 1070 unconstitutionally forces the federal government to re-prioritize its enforcement resources and go after undocumented people who are not dangerous.” Said Scalia:

“But does the attorney general come in and say, you know, we might really only want to go after the professional bank robbers?” Scalia said. “If it’s just an amateur bank robber, you know, we’re going to let it go. And the state’s interfering with our whole scheme here because it’s prosecuting all these bank robbers.”

Angela Kelley, an immigration policy expert at the liberal Center for American Progress, told TPM that Scalia is funny but the analogy is false. “As a justice, he knows that there are things only the federal government can do, things the states can do and some things both can do,” Kelley said. “In this case only the feds can deport unauthorized immigrants. In the case of bank robbers, either the states or the feds can arrest, prosecute and jail them.”

Scalia is said to have gotten rather worked up in the courtroom interrupting Verrilli’s argument about international factors, saying, “So we have to enforce our laws in a manner that will please Mexico. Is that what you’re saying?”