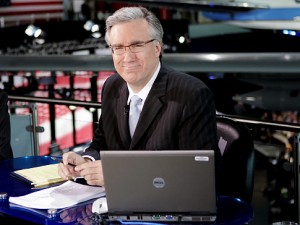 Update: Keith Olbermann has announced that he is suspending his Twitter account “until this frenzy is stopped.”

Update 2: This is serious. He has even taken down his profile picture.

On Tuesday’s Countdown, host Keith Olbermann and guest Michael Moore sparked widespread outrage over their dismissive treatment of rape allegations against Wikileaks founder Julian Assange. While some of the segment is open to interpretation, Moore made a clear factual error when he said that Assange only stands accused of having his condom break during consensual sex.

First some background on the initial controversy as I reported it last night:

Filmmaker Michael Moore is in hot water over comments he made during Tuesday night’s Countdown with Keith Olbermann. In discussing rape allegations against Wikileaks founder Julian Assange, Moore appeared to dismiss the accusations as “hooey” (although he was actually referring to what he views as the use of the allegations as a pretext to silence Assange), and repeated the false claim that Assange is only accused of having a condom break during consensual sex.

When I asked Olbermann to clarify via Twitter, he responded by attacking me personally, then offered the kind of non-apology that he would normally fricassee had it come from a conservative.

To be clear, there is a compelling case that Olbermann and Moore were engaging in despicable rape apologia, a case with which I agree. Tigerbeatdown.com, the website that started the Twitter campaign to shame Moore into apologizing, makes that case more eloquently than I ever could.

However, much of that case relies sufficiently on matters of interpretation and (completely fair) logical extensions to make it impractical to argue 140 characters at a time. As Olbermann’s Twitter feed attests, the format lends itself to deflection and selective response.

This is why I chose to focus simply on Moore’s assertion, unchallenged by Olbermann, that the allegations against Assange consist merely of consensual sex during which the condom broke. Guilt or innocence aside, the substance of the allegations are verifiable, and have been reported extensively. In fairness to Olbermann, though, I allowed that the “broken condom” lie has been so oft-repeated in the media that perhaps he was unaware it was false. Here’s how our Twitter exchange began:

chrisatyoursix I cant wait to watch @KeithOlbermann at 8 to see why @MMFlinthelped bail out an accused rapist. 14 Dec

tommyxtopher Because that’s what he’s accused of: holding a woman down after she said “stop.”http://bit.ly/fMVA7m (link)

tommyxtopher I’m not asking to be a douche, just allowing that maybe you and @mmflint really don’t know what Assange is accused of. (link)

KeithOlbermann @tommyxtopher You’ve already crossed that threshold. Do not contact me again. (link)

He followed up by calling me a “hatchet man,” and when others tried to get him to answer the question, resorted to craven sophistry:

jsmooth995 @KeithOlbermann Your ad hominem jab, even if true, doesn’t negate the substance of his questions. And he’s hardly the only one asking. (link)

amaditalks @KeithOlbermann Well I’m no one’s hatchet man & I don’t work for any websites. So how about if you answer that question for me? (link)

KeithOlbermann @amaditalks Do you have a copy of the charges? Because until you do, the answer is, “none of us knows.” (link)

suddenlyjen love @KeithOlbermann freaking the f**k out over someone asking a totally reasonable question. Congrats on being an adult, Keith! (link)

KeithOlbermann @suddenlyjen Next time you get a flock of people lying about what you said or did not say on tv, remember how you phrased that (link)

There may have been people in the #MooreAndMe thread who ascribed things to Olbermann that he didn’t actually say, but I was certainly not one of them. To be clear, I point this out not out of some sense of personal injury (my record speaks for itself), but to demonstrate the lengths to which Olbermann will go to avoid admitting he was wrong.

The fact that Olbermann engaged the issue at all is minimally to his credit, at least relative to Michael Moore’s complete silence on Twitter. However, his “apology” left much to be desired: (condensed from 5 separate tweets)

Rape has touched my family, directly and savagely, and if anybody thinks I have addressed it without full sensitivity, then that assessment is the one that counts, and I apologize. But these accusations that I “revealed” an accuser’s identity by retweeting Bianca Jagger’s link, or that I ‘shamed’ an accuser by asking a question about the prosecution of a man governments are trying to bury, or that I do not ‘understand’ charges that have yet to be presented in their final form, reflect exactly the kind of rushing to judgment of which I’m accused, and merit the same kind of apology I have just given.

Olbermann did, indeed, retweet a link that contained the identities of Assange’s accusers, a fact of which I was previously unaware. Whether the info was already “out there” or not, this act (even if inadvertant) abetted the very tactic that keeps many women from reporting rapes at all. Olbermann may be technically innocent of “outing” the alleged victims, but he certainly played a part.

Leaving aside the “sorry you’re so sensitive” tone of the apology, which is (minimally) open to interpretation, it fails to address the substance of the complaints against him. Obviously, no decent person is immune to the horror of sexual abuse, at least anyone who knows six or more women. In the macro, Olbermann and Moore stand accused of allowing their zeal to defend Assange to override that empathy.

Specifically, though, they have made a factual error regarding the accusations (not the “charges,” not the guilt or innocence thereof) against Julian Assange. Both owe a correction, and without it, apologies are worthless.

Update: Keith Olbermann has announced that he is suspending his Twitter account “until this frenzy is stopped.”