Is Glenn Beck Playing With Fire By Engaging With ‘Anonymous’ And Operation Payback? 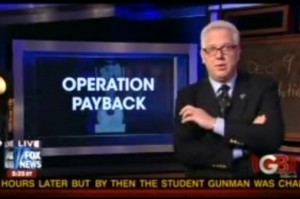 For the past few weeks Glenn Beck has joined the chorus of opinion-media personalities discussing the fascinating story of WikiLeaks and Julian Assange. In Beck’s inimitable fashion, he cut straight to the part of the story that resonated emotionally with his audience, focusing on revolution and youth, represented by “hactivists” and “Operation Payback.” But now that someone claiming to represent the renegade vigilante set of hackers known as Anonymous has sent a message to Beck regarding his coverage, one can only wonder if he is in danger of painting a target on his own back.

The story of WikiLeaks and Julian Assange is, by any measure, an enormous story, and with good reason. Any story that includes narratives such as treason, computer hacking, and freedom of the press deserves a ton of attention. Mr. Beck’s coverage, to date, has been opinionated, but also remarkably fair, going so far as to criticize the sexual misconduct charges against Mr. Assange. Earlier this week, however, Beck informed his audience about the “hactivists” who have supported WikiLeaks, a thread in this story which is best explained by someone more familiar with the Internet culture that spawned the “hactivists.” From Cole Stryker at Urlesque:

Glenn Beck recently declared that 5,000 (no idea where that number is coming from) “hacktivists” (lol) are fomenting pinko revolution by hacking into the networks of those corporate entities who would disassociate themselves from Wikileaks.

He quotes Coldblood, that geeky kid who appeared on Canadian TV last week, as a spokesperson for Anonymous. But, as I’ve explained, the 22-year old is no more a spokesman for Anonymous than your teenage son. Anonymous has no spokesman, no leadership, no structure. I would be surprised if a few dozen of them know how to hack anything, let alone 5,000. This is no cabal of Tyler Durdens. It’s not an underground arm of socialist interest groups.

Those unfamiliar with the depths of Internet sub-culture can be forgiven not knowing much about “Anonymous.” To be fair, the anonymous crowd-sourced set of vigilantes responsible for some of the most newsworthy stunts in Internet history is a hard concept to understand. But they’ve garnered well deserved mainstream attention of late because of theire recent attempts to disrupt any entity who is alligned with they see as the wrong side of justice over the WikiLeaks story (Operation Payback). Glenn Beck has taken an admirable whack at trying to explain to his audience something that verges on being inexplicable, though as is often the case, his explanation is almost certain to offend someone, somewhere.

This is a dangerous place to be with these individuals. Comments made by media figures about Anonymous, and their vigilante hacker brethren, should not be made lightly. Recently, Gawker Media’s network of websites received a remarkably embarrassing and potentially disastrous hack, that saw their personal email system, content management system and commenter database all compromised by a group of hackers that call themselves Gnosis. These hackers claim no affiliation with Anonymous, but did share with Mediaite the reasoning behind their hack: what they saw as arrogance towards the hacker community in comments made by Gawker Media’s founder Nick Denton.

This morning, news surfaced of a letter from Anonymous directed towards Mr. Beck regarding his coverage, which is a fascinating portrait of the paradox of being part of such a group. The letter includes “we are not an organization. We have no leaders. We have no official spokesperson,” and yet is signed “Anonymous.” Clearly a healthy dose of skepticism on these sorts of things is warranted, but the tone and nomenclature are consistent with other Anonymous correspondence. Therefore, given that Beck now has received what looks like a note from someone familiar with that world, and that Beck has already made a point of calling them out, one wonders if its just a matter of time before any of the Glenn Beck affiliated web properties (like GlennBeck.com or TheBlaze.com) are suddenly in the same position as Gawker.

The full text of the letter is below, followed by Mr. Beck’s initial report on Operation Payback.

We have no problem with those who criticize us. We understand that freedom of speech includes the right to speak out in criticism of those whom you may not agree with. We have many critics, and we respect their first amendment rights.

However, in your recent comments, it seems that you and/or your editing team have mixed up a few details during your research on us. We at Anonymous wish to set the record straight, so that you and your audience will be better informed about us and our objectives. Hopefully, this will reduce some of the anxiety you may feel towards us in the process.

You see, Mr. Beck, we are not an organization. We have no leaders. We have no official spokesperson. We have no age, race, ethnicity, color, nationality, or gender. Anyone who claims to speak for all of us is, quite frankly, a liar. To be clear, the gentleman known as Coldblood was not sanctioned by anyone but himself to speak on our behalf.

Your attempts to formally link Anonymous to Wikileaks were misguided. We are not formally linked to Mr. Assange, to Wikileaks, or the break-off operation, Openleaks. To reiterate, we are not an organization of any kind.

You spoke of revolution as though it is necessarily a bad thing. Let us remind you that America was founded upon revolution. Furthermore, the world we live in today is the result of numerous revolutions that have occurred throughout human history – many of them being positive, and resulting in advancements for all of humanity.

You seem to imply that we are revolutionaries. We do not object to this – in fact, it pleases us.

Neither Wikieaks nor its founder have been charged with any crime in connection to any of the published leaks. Thus, we at Anonymous see any actions directed at silencing Wikileaks as an assault on our freedom of information and the freedom of those at Wikileaks to publish as they see fit.

Whether young or old, political or apolitical, moderate or hard-liner, the issue of freedom of speech and information affects us all. Please do not aspire to make the Wikileaks issue more divisive than it already is, Mr. Beck.

We embrace everyone from all walks of life, from all corners of the earth, to join us in our quest to protect and further enhance not only our rights to freedom of information and freedom of speech, but all of our human freedoms.

You are welcome to talk to us at anytime. We will answer any further questions you may have. After further dialogue, perhaps then you will see that you and we are not so different. Anonymous can be anyone, anywhere, at anytime, and that includes you and your audience as well, Mr. Beck. We simply wish to see the freedoms of all Americans and all citizens of Earth to be at the very least maintained, and wherever possible, strengthened and enhanced to their fullest extent.