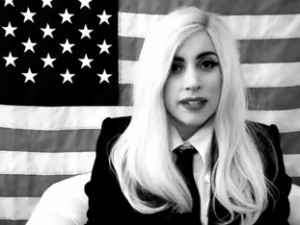 Gay soldiers have become targets. In short, not only is the law unconstitutional, but it’s not even being properly or fairly enforced by the government. Our fight is a continuum of the ever-present equal rights movement. … Unfair laws like “Don’t Ask, Don’t Tell” were put in place to eliminate friction and violence, but, in the end, only delay the process of ending this most serious prejudice.

Ms. Gaga’s seven-and-a-half-minute long missive goes on to explain that she is “a voice for my generation, not the generation of the senators who are voting.” Then, in what seems contrary to her desire to eradicate “this most serious prejudice,” she continues:

We are not asking you to agree with or approve the moral implications of homosexuality. We’re asking you to do your job. To protect the Constitution. As majority leader Harry Reid said, “Anyone who is willing to fight for this country should have the same civil opportunities to do so as anyone else.” It is my belief that no one person is more valuable than another.

Lady Gaga, who has a net worth of $40 million, went on to highlight the stories of individuals affected by “Don’t Ask, Don’t Tell,” before imploring:

Her request was followed by a phone call to Sen. Chuck Schumer, who, after an entire minute of phone ringing, proved to be unavailable. She then called the other senator “that operate[s] in [her] district,” Kirsten Gillibrand, who also did not answer. She concluded her video by threatening:

I will not stop calling until I can reach them and I can leave them this message: I am a constituent of the senator. My name is Stefani Joanne Angelina Germanotta, also known as Lady Gaga. I’m calling to ask the senator to vote with Senators Harry Reid and Carl Levin to repeal “Don’t Ask Don’t Tell” and to oppose John McCain’s shameless filibuster. We need to do this for our gay and lesbian soldiers. … Thank you. God bless.