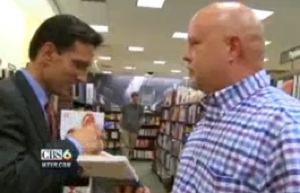 Rep. Eric Cantor of Virginia has been touring the country to promote his new book Young Guns: A New Generation of Conservative Leaders (watch the book’s epic YouTube trailer here). But as ThinkProgress reported, Cantor can’t even sign his book at Barnes & Noble without encountering protests from both Tea Party conservatives and Democratic activists.

“Gimme a debate,” demanded Cantor’s sign-holding Democratic opponent Rick Waugh, before explaining, “He will not debate us.”

But while Waugh was demonstrating from the sidewalk, the Tea Party-backed candidate Floyd Bayne confronted the congressional Republican to his face.

“Mr. Cantor,” Bayne said, as Cantor signed a copy of Young Guns for him. “I’m wondering when you’re going to debate us, partner. Give the people a chance.”

Bayne later told news cameras his qualms with the congressional Young Gun’s claim that he’s bringing the Republican Party closer to its roots:

[Cantor] voted 96% of the time with George Bush’s agenda, which grew the federal government and created the biggest deficit in the history of this country — until Obama took office.

In what turned into something of a postmodern political debate, Cantor later countered Bayne’s argument to news cameras as well:

There’s no question that we learned our lessons. … We spent too much money, and we abandoned some of the principles that Republican Party stands for — that’s limited government, that’s a focus on equal opportunity for all by allowing the private sector to grow and create jobs.

Some members of the private sector, however, didn’t care for this impromptu debate. When a cameraman asked one customer how many copies of Young Guns she had had signed, she said, “Four, with my husband.”