Laura Ingraham: ‘The Devil Is Not Just In The White House, It’s In The Details’ 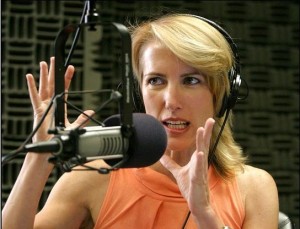 Conservative commentator Laura Ingraham went a little Hugo Chavez on President Obama in her criticism of his jobs speech today. Conservatives, indeed, many Americans, were none too pleased when, in 2006, Venezuelan president Hugo Chavez referred to then-President George W. Bush as “the devil,” and said he could still smell the sulfur where Bush had stood.

It’s a bit odd, then, that a conservative like Ingraham would take such a page from Chavez, saying of President Obama’s American Jobs Act, “The devil is not just in the White House, it’s in the details.”

During the Friday broadcast of her syndicated radio show, Ingraham was infuriated at Obama’s suggestion to close tax loopholes for the rich to help fund some of his various job proposals. The talk show host thought the President should be instead commending those who are “hard-working, ambitious, innovating,” and “work their buns off.”

Ingraham is correct that the money didn’t just fall into their laps, and many of them are some combination of hard-working, ambitious, and innovative, but critics to Ingraham’s left would likely point out that they also didn’t make that money in a vacuum, that t hey benefit disproportionately from government-funded infrastructure that they couldn’t hope to pay for on their own.