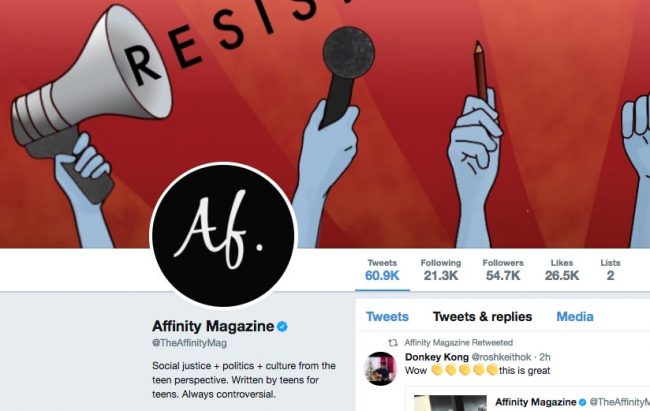 The tragic death of Otto Warmbier yesterday exposed a previously unforeseen level of horror Americans imprisoned in North Korea can face. With the United States now in mourning, President Trump offered his condolences, while television personalities thundered that the rogue Communist nation had committed an “act of war.”

None of that, however, mattered much for Affinity Magazine, which took to Twitter shortly after Warmbier’s death to suggest that he brought it on himself by not respecting the laws of North Korea and added that, “he wasn’t a “kid” or “innocent.”‘

When someone suggested in the comments that maybe stealing a propaganda poster didn’t justify execution, Affinity doubled down, shooting back that “the punishment was harsh but also you have to respect the laws in other countries”

Of course not, the punishment was harsh but also you have to respect the laws in other countries

Affinity, whose Twitter banner sports an image of anti-Trump protestors along with the slogan “resist” was created by Evelyn Atieno as a publication to focus on politics and social justice from “the teen perspective,” and apparently its content is exclusively created by teenagers. A look at their website almost begs the question of whether the entire enterprise is a parody. The headline of a featured article on Tuesday, June 20 blared that “Indigenous People Are Asking the UN To Outlaw Cultural Appropriation – And the UN Is Listening.”

In a Huffington Post explainer essay, Atieno said she created the magazine as “a safe space for teenagers to send in their articles about being illegal aliens, non-binary, agender, and discussing why they need feminism.”

If such callous foolishness from stupid teenagers were merely a one-off from an irrelevant media property, it would hardly merit comment here. But Affinity was hardly alone in celebrating Warmbier’s suffering.

His death yesterday also exposed the callous hypocrisy of various left wing social justice rags, which preach a woke game on issues like Standing Rock protests, but published takes openly celebrating Warmbier’s apprehension back in 2016. Salon called him an “idiot fratboy,” while Huffington Post crowed about how his “white privilege” wouldn’t work in North Korea. During his brief career as a television host, Larry Wilmore, a comedian known for being as funny as an oyster, dedicated a segment to mocking Warmbier’s name before dismissing the matter entirely. “It’s just tough for me to have much sympathy for this guy,” he said.

You can watch his vileness below.

Affinity and other social justice publications aspire to speak to the needs and aspirations of idealistic young people. But I hope they don’t. I don’t know too many teenagers these days, but the few I do wouldn’t celebrate the suffering and death of Mr. Warmbier just because he is white. That kind of senseless racial nastiness, rather, comes from an intolerant and regressive left which has hijacked the megaphone on behalf of a generation.