Leonardo DiCaprio Reportedly in Talks to Play Which President? 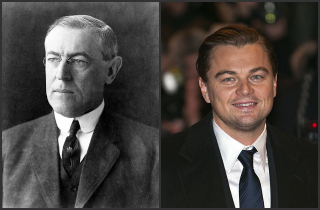 According to The Hollywood Reporter, Leonardo DiCaprio is reportedly in early talks to play President Woodrow Wilson in a biopic film based on a new biography about the 28th president.

Warner Bros. is reportedly in negotiations to pick up the rights to Wilson, a recently-released biography by A. Scott Berg. As THR reports, in addition to starring in the film, DiCaprio will produce the project with Berg and Appian Way’s Jennifer Davisson Killoran.

The book, which hit shelves last week, has received generally positive reviews for its intimate portrait of Wilson, who was elected president in 1912 and guided the nation through World War I.

Berg offers up a heroic, larger-than-life Wilson, emphasizing his progressive achievements like the creation of the Federal Reserve and his crusade in support of the Treaty of Versailles and the League of Nations while downplaying his weak record on civil liberties and civil rights for African Americans. Wilson remains a deeply controversial figure to professional historians and a villain to many on the right (notably Glenn Beck).

The biography offers several “well-narrated dramatic moments” that could play well on film:

Wilson’s 1919 barnstorming tour of America to build support for the League of Nations that led to his stroke might be the most obvious. Other contenders include his romancing of Edith Galt and their 1915 White House wedding (Wilson’s first wife died in 1914, one year into his term. He’s the last president to marry in the White House), the 1912 campaign and the decision to enter the war in 1917.