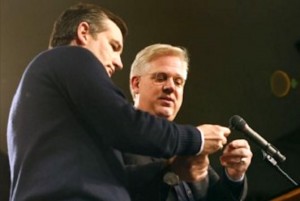 Just when you thought the loony tornado of garbage surrounding the death of Supreme Court Justice Antonin Scalia had reached peak weirdness, along comes Glenn Beck to take it to eleven. Calling in to his own radio program Tuesday, Beck began by casually riffing about how God sent Hurricane Sandy mainly to screw Mitt Romney, but then moved on to his theory that Our Lord and Savior has taken Scalia off the board so Ted Cruz can get elected:

After I got past the “thank you (to God)” I thought “You’re welcome.I just woke the American people up. I took them out of the game show moment and woke enough of them up to say, look at how close your liberty is to being lost.”

You now have lost your liberty. You replace one guy and you now have 5-4 decisions in the other direction. Just with this one guy, you’ve lost your liberty so you’d better elect somebody that is going to be somebody on [the court] because for the next 30 years, if you don’t, the Constitution as you know it, and Pat, I say this all the time. The Constitution is hanging by a thread. That thread has just been cut and the only way that we survive now is if we have a true constitutionalist.

Solid theory, Glenn, but wouldn’t it be easier for God to just make Ted Cruz not be such an asshole? Wow, I answered my own question.

What makes this all the more disturbing is that Ted cruz is on board with the idea that God is pulling the strings for him. Cruz has Beck introducing him at rallies these days, at which Beck explains to the crowd how Ted Cruz is the one to lead this country to The End Times:

“Fall to your knees and pray to God to reveal to you what the hour is.”

“This is your last call, America! Stand, stand with the man I believe was raised for this hour, Ted Cruz!”

For the uninitiated, “the hour” is biblical code for the End of Days, and Ted Cruz has Glenn Beck telling crowds that he was “raised” for it, a verb form of the adjective “Risen.” Makes you wonder, if God can’t win South Carolina for Ted Cruz, what’s his “firewall” going to be, an actual wall of fire?

Liberals often make too much of candidates’ religious beliefs, but in this case, they ought to pay attention.