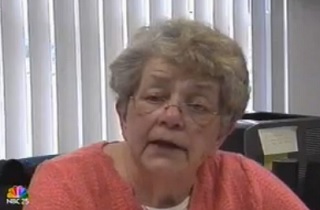 Buena Vista Township Clerk Gloria Platko is resisting demands that she step down after another local official, Interim Township Manager Dexter Mitchell (a Democrat), taped a phone conversation in which Platko referred to Township Supervisor Dwayne Parker (also a Democrat) as “an arrogant nigger.”

The 63 year-old Democrat later apologized for the “slip of the tongue,” but shockingly insisted that her use of the slur doesn’t make her racist, because she has “eaten Thanksgiving dinner with black friends at their house.”

Mitchell said he recorded the call in January without Platko’s knowledge because he didn’t want her to twist his words. About six minutes into the recording, Mitchell asks, “Would you be willing to sit down with (Parker)?”

Platko told Mitchell that Parker is “just rubbing me the wrong way.

“He is just doing whatever he can. You know what I think of Mr. Parker right now, and I know you’re not even going to like this,” Platko said in the recording. “But he’s just an arrogant (N-word). And I’m sorry to say it that way, but that’s the way I feel.”

Here’s the relevant portion of the conversation (you can hear the full recording here), which includes Mitchell asking Platko “Why would you say that?”, to which she replies “Because that’s what he’s proving to be, he’s just arrogant.” It’s like being asked why you shot a guy, and responding “Duh! Because I’m lousy with a knife!”:

As is often the case with these things, Platko’s apology didn’t really help all that much. She told local NBC 25 reporter Walter Smith-Randolph that she was “sorry to my five other board members, and I’m entirely sorry to this entire community,” but added that “I’ve eaten Thanksgiving dinner with black friends at their house. So I’m far from prejudiced. You need to go interview some of the black people who have supported me for the last four or five years.”

Smith-Randolph did just that, but didn’t have much luck finding any Platko boosters.

Smith-Randolph added “Platko says she’s not going anywhere because she was baited,” and played a clip of the embattled clerk asking “Why didn’t he ever tape any of the other phone conversations?”

I’m going to hazard a guess, from listening to the entire call, that if he had recorded prior conversations, those recordings likely bored themselves to death. What’s Platko’s defense, that Dexter Mitchell’s tape recorder has Jedi powers? (In case you’re wondering, according to current state law and judicial precedent, Mitchell’s taping of the conversation was legal.)

“Yea, I probably should’ve used a word like ‘ignoramus’ or something like that, but I didn’t, and I’m sorry for the word I used,” Platko concluded. Here’s the video, from NBC 25:

There are two things worth noting in this story. The first is that old racist attempt to recast slurs as something other than what they are. We all probably have that one white acquaintance who has tried to push that “What? A n*gger is an ignorant person, look in the dictionary!” business on us, but as Wonkette‘s Jeff Wattrick points out, those definitions are rooted in the prejudice of the word. When Gloria Platko poses “ignoramus” as a synonym for the n-word, she’s proving the point, not disproving it.

The n-word meant “an ignorant person” in dictionaries of old because racists applied that characteristic to black people in their usage of the word, and the current application of the term to other races and nationalities is meant to convey that black people are inferior, hence the race or nationality in question is exceptionally inferior. The flip side of this is the term “white trash,” which suggests that all other races are de facto trash, whereas the trash is the exception among whites. I’m sorry, fellow white people, but there is no dictionary, no explanation, no Chris Rock routine that’s going to make it “okay” for you to use the n-word. If you think you’re “down” because your black friends let you use it affectionately, you’re really not; they’re tolerating you, but you’re just annoying them.

When I say “okay,” of course I’m not suggesting that people not be allowed to say it. It’s a free country, and it would be nice to have these people out in the open, but if you say racist things, you are going to be judged accordingly. And no, Don Young, “wetback” was never not an insult.

The other important thing about this super-local story is that the offender was a Democrat. I put it right there in the headline, which is a good thing, because none of the accounts I’ve read or watched include this important bit of information. It’s important because it means lots of right-wingers will hopefully see that headline and rush to link to it because “Look! A Democrat is racist, too!”

That means that at least some of their audience will get to read this part (or have a liberal read it to them). Yes, there are Democrats who are racist, or who say racially insensitive things. Truth be told, sometimes the media lets them off a lot easier than they would a Republican, although that often has something to do with the degree of offense. I’m not sure there’s a Democratic equivalent for the “Macaca” guy, George Allen, or a clearer message to minorities than responding to his disgrace by running him for U.S. Senate in 2012. I’m also pretty sure that if you kept score, the Red vs. Blue Racism Bowl would be over at halftime.

But let’s forget all of that, like Rand Paul. Let’s pretend it’s even-Steven, and Democrats are going around, dropping n-bombs like an Eazy-E impersonator on a Red Bull bender. The difference is that when Democrats insult an entire race of people, Democrats still let them vote. They fight for their right to vote them out. They don’t complain about all the black people and minorities who are voting, they use a “machine” to encourage it. You can argue all day about which party’s policies are actually more helpful to minorities, but only Democrats support allowing as many of them as possible to decide the question.