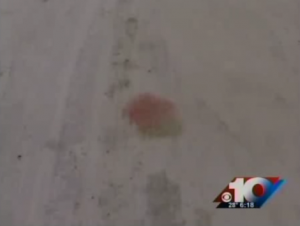 So, you’re in bed when headlights from a car outside keep flooding your window and waking you up. You decide to show the driver what for? You grab a big club or a lead pipe and head out there. Clearly you’re going to look pretty intimidating, right? Absolutely!…UNLESS the guy in the car happens to have a samurai sword and is totally ready to throw down.

That’s what happened in Terre Haute, Indiana this past Friday. According to Terre Haute’s WTHI, a fight ensued and we all learned that, like the rock and the scissors, the samurai sword always beats the wooden club:

Police say that the man was sent to an Indianapolis hospital to reattach his fingers.

Investigators talked to the man with the sword at the scene.

Police are still hoping to talk to more witnesses and get a clearer picture of exactly what happened.

In the mean time, the man with the sword is not facing any charges at this time.”

There appears to be some discrepancy as to which weapon the man in the house used. The original video report identified it as a “lead pipe” while the updated article calls it a “wooden club.” Really, though, once a samurai sword gets involved, does it really matter?

Check out the video report from WTHI below: