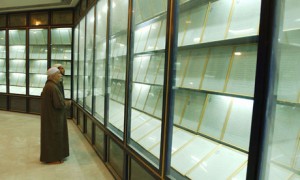 There’s megalomania, and then there’s this: back in the ’90s, when you were busy drinking Zima and watching Melrose Place, Saddam Hussein commissioned a Koran to be written in his own blood. And now, eight years after his death, Iraq is, well, a bit unsure of what exactly they should do with the gruesome artifact.

First, some details about the book’s creation, provided by The Guardian:

Over the course of two painstaking years in the late 1990s, Saddam Hussein had sat regularly with a nurse and an Islamic calligrapher; the former drawing 27 litres of his blood and the latter using it as a macabre ink to transcribe a Qur’an.

More recently, the bloody corpus has been resting in the vault of a Baghdad mosque, locked away until scholars can figure out what to do with it. To add to its supernatural aura, Sheikh Ahmed al-Samarrai tells the Guardian that “there are three keys and none of them are held in the one place. I have one, the police chief in the area has another and there is a third in another part of Baghdad. There has to be a decision of a committee to let you in.”

Opinions in Iraq vary, as one would expect, with what the Blood Koran’s fate should be. “It was wrong to do what he did, to write it in blood,” says the same Sheikh who said he had one of the three keys. “It is haraam [forbidden].”

“This is very destructive for the psyche of the Iraqi population. This is a clear reminder of the consequences of totalitarianism and idealising a person that embodies evil. They have brought nothing to Iraq. They are not worth celebrating. They have nothing aesthetic to offer. I am for removing them.”

Others are considering the matter in a more historical context:

“He was there and he ruled and he impacted on the world,” said Mowaffak al-Rubaie, the former national security adviser who escorted Saddam to the gallows. “But he was a part of our history. He was a bad part of our history, but he made a huge difference, whether we like it or not. We need not bury the legacy of that period. We need to remember it, all what is bad and what is good and learn lessons.”

Also, SADDAMN HUSSEIN HAD A KORAN WRITTEN IN HIS OWN BLOOD. You can learn more about this insanity with this lengthy article over at The Guardian.