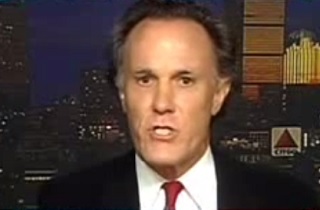 Recovering Evangelical™ and sometime MSNBC guest Frank Schaeffer has penned an article decrying the mistreatment of President Obama by Republicans, but mainly succeeded in demonstrating the urgent need for Comprehensive Godwin Reform. In his now-viral post on the religion blog Patheos, Schaeffer takes a legitimate premise to 11 with the headline “The Slow Motion Lynching of President Barack Obama,” then takes it on up to 12 by decorating his blog with a photograph of an actual lynching.

One famous liberal commentator wrote a book on how Ronald Reagan and Tip O’Neil could disagree and still be friends. Why, he asked on many a TV show promoting his book, couldn’t President Obama be like that? Because, I yelled at the screen, those two men were white Irish Americans and part of a ruling white oligarchy.

Because, I yelled, you might as well ask why Nelson Mandela didn’t talk his jailers in South Africa into seeing reason.

Because, I yelled, the President is black and anytime he’s reached out he’s pulled back a bloody stump.

Because, I yelled, liberal white commentators have been as bothered by a black man in the White House, who’s smarter than they are as much as right wing bigots have been bothered.

Because, I yelled, President Obama has been lied about, attacked, vilified, and disrespected since Day One.

Because, I yelled, this country may have passed laws so blacks can vote and eat in a white man’s world, but in our hearts are stuck in a place more like 1952 than 2013.

Unfortunately, that point is buried in a relentless stream of lynching consciousness that includes his opening line, “I’ve watched liberal and right wing commentators alike blame the president for being lynched,” and which features Schaeffer throwing around the term as if it were just another bit of hyperbole from a blog headline, like “eviscerates.”

There’s a smaller problem with Schaeffer’s article, which is that no matter how badly you think President Obama has been treated, or for what reason, he isn’t dead; not politically, metaphorically, or otherwise. As a matter of fact, the President has managed to accomplish quite a bit in spite of the resistance, and still has a few years left in him. To the degree that race has influenced or amplified that resistance, it’s not a lynching. You don’t get to fret over your low approval ratings after one of those.

The larger problem, of course, is that lynching is a real thing that happened to real people, and the lynchings of black people in the South that Schaeffer evokes are a particular horror that, like the horrors of the Holocaust, or of slavery, should not be trivialized in political metaphor.

As if to underscore that point, Schaeffer adds further injury to injury by including a photograph of an actual lynching to drive his point home. As if to expose how little Schaeffer understands about the subject, the source photo isn’t even of an old South lynching; it’s from a color photograph that appears to originate in Asia.

Update: Schaeffer has switched out the picture, thankfully. You can still access the cached version here, but don’t.