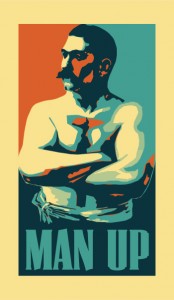 It’s not difficult to imagine a new Cialis ad: “It can happen at any moment”, the announcer intones. Onscreen, we see a campaign debate between Mr. and Ms. contenders. The woman looks meaningfully at the guy and shrieks “MAN UP!!”.

Maybe that’s the inspiration for the “Man Up” mantra we’re suddenly hearing from so many candidates, who are giving new meaning to the word “hardline”. It’s almost, but not quite always, women, and usually Republican.

Obviously, they are trying to deal with Electile Dysfunction. That would be the best explanation why the expression has suddenly, uh, arisen.

The only other plausible one is that some Tea Party genius (I know, an oxymoron), decided it would be a good way to label the opposition as timid, soft on something or other.

Usually, when everyone suddenly starts with the same construct, it can be traced back to the dark mind of some wordsmith. But sometimes it spontaneously spreads like so much swamp gas. That seems be the case here as one candidate after another adopts it as a phrase meant to titillate (Where IS my mind?).

It’s not new, but right now this verbal disease is bouncing from one distaff side to the other from R to D. It’s spewing out of the mouths of Senate candidates like Nevada’s Sharron Angle, and Missouri’s Robin Carnahan. It does seem to be more of a phenomenon of the Right though.

It is a favorite expression of Sarah Palin who has taken it a step further, as she always does. The Grizzly Momma riffs about how President Obama lacks “cojones. That’s puzzling because the word is Spanish, of course, and we all know how Palin and her ilk hate Hispanics.

In the process, however, she and the others in her new mainstream fringe illustrate how all this “Man Up” chatter could be taken to its extreme (I know, a redundancy).

Suppose the issue is interstate prostitution. would a former governor be told to”Mann Up!”?

How about differences over support for Israel? Will that be “Manischewitz Up!”?

The truth is that given the uncommonly nasty tone of politics these days, the more appropriate demand would be to “Mean Up!”. Obviously, few need that advice.

These mid terms have been splattered with the slime of bigotry, ignorance fear mongering, and just plain nastiness. By comparison “Man Up”, is just dopey.

It not in the same league as some of the malice and demagoguery that distorts discourse. It’s merely simple minded.

In the realm of policy debate ignorance is diss, empty substance is supplemented by empty rhetoric, full of nothing but conjured emotion. “Man up” is relatively harmless. Except for one concern: it is flat out irritating.

Isn’t it grating to hear those on both sides recite their coordinated “talking points” no matter who they are, or where they are. They parrot this vacuous verbiage like so many partisan automatons. It’s sad really. The sound spurts last for a short while and then the talking mannequins are reprogrammed.

Unfortunately what many of us have now is a dreary case of “Man Up” Depression that no little blue pill is going to cure.
Maybe we can replace that inanity with another maxim. How about “GROW UP!!”

(Bob Franken, a former CNN Correspondent, is a syndicated columnist for Hearst and King Features)