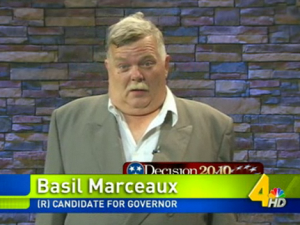 A video has been going viral since yesterday evening of Basil Marceaux, a gubernatorial candidate from Tennessee, discussing his platform on Nashville’s WSMV 4 in a slightly less than lucid fashion. This was supposed to be a quick post for me (throw up the video, make a joke, get out), but I’ve been staring at my screen forever and I can’t do it. I just can’t make fun of this guy. Part of the reason is that Wonkette has already completely (and hilariously) eviscerated him, but the other part is because it just doesn’t feel right. So I’m going to take a different route and point out how this viral video works as proof of what is so great about our country.

When I first saw the video early this morning, I thought Marceaux had just kicked back a few too many drinks to calm his nerves before a big television appearance but, after viewing Marceaux’s website (which, despite what he says in the video, totally isn’t ImBasilMarceaux.com or even BasilMarceaux.com) and reading his writings, it became clear that what you see is what you get and that this is the real Basil Marceaux…or possibly the most brilliant political performance art prank since Andy Kaufman threw on some cheek puddy, faked a deeper gruff voice, and made everyone believe that there was a real man named “Richard Nixon“. On the website, Marceaux has a list of “Things I done for my citizens,” asks “why Democracy invaded the U.S. State on July 16 1866,” and promises that, if people vote for him, “I WIN I WILL IMMUNE YOU FROM ALL STATE CRIMES FOR THE REST OF YOU LIFE!” Even more amazingly, you can check out his son’s site (Basil Jr. is running for Tennessee House Representative) and find some equally terrific quotes.

So, yeah, all of that stuff is pretty easy to make fun of (and feel free to do so, it is funny), but let’s look at the facts here. Maybe Marceaux isn’t the smartest man in the world, maybe he has some out there ideas, maybe he repeatedly connects routine traffic stops to slavery for some reason, but none of that matters. He is still getting his say out there. He is still running for office. He even got to go on TV just like every other candidate, although the anchors introduced him as if they were introducing the “pity contestant” in an elementary school Talent Show. If that doesn’t scream America, a country that promises to give every single person their fair shot (and tries pretty darn hard to keep that impossible promise), I don’t know what else does.

So check out the video below. Check out his website as well as his son’s. Even check out his YouTube page which features nothing but eight minute long videos of Marceaux staring into the camera accompanied by static. Check out all of this and have a good laugh. But, once you’re done that, at least give the guy some credit; he’s kind of the American dream.