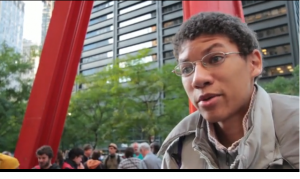 We the media have, in general, been slow to cover the Occupy Wall Street movement and, when we have, the focus on who, exactly, has been participating in the nation-wide movement has been questionable at best. So it’s refreshing to see an outlet cover someone specifically involved in the event rather than make a sweeping generalization about a group that contains everyone from, sure, the stereotypical pot-smoking college demonstrator to veterans to former bankers to parents concerned about how they will manage to pay for their children’s college educations. Demonstrating right along with them all is Jelani Gibson, a 4.0 high school student from Pontiac, Michigan who made the trek to lower Manhattan with his grandmother.

I’m always hearing how banks are being bailed out, how companies are getting these tax cuts, and how resources are being robbed from other countries…but I don’t ever hear of people protesting about it in a large group. So when I heard about it, I’m like, Oh wow. Grandma’s going so maybe I can just ask her to take me with her and she did.

“I realize,” he added, “that once the previous generation is gone, my generation will be left with a mess. And it’s like, ‘Do I really like what I’m being left with here?'” He later said, when asked if he’s seen homeless people at the event, that he isn’t sure because “there are lots of creative types here.” Wait ’til college, Jelani. Just wait ’til college.