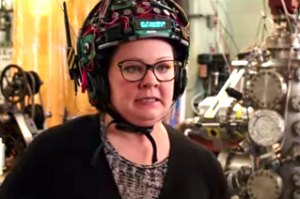 There has been so much whining about the all-female Ghostbusters reboot. It has inspired roughly a bajillion thinkpieces on misogyny and nostalgia and entitlement and the intersection of all of those things together. (I assume the number is close to a bajillion by now; I stopped reading Ghostbusters essays about five months ago after I realized they are never, ever going to stop until the movie comes out, people watch it, and we move on with one final, epic deluge of opinion pieces on the matter.)

For the countless hours spent by angry Internet users tweeting complaints about the still-unreleased film or commenting unkind things on the official trailer and for the equally countless words typed out by bloggers looking to craft the perfect take-down of those negative commenters, nothing can compare to the simplicity of Melissa McCarthy‘s statement on it all.

The star of the reboot told the Guardian this:

All those comments – ‘You’re ruining my childhood!’ I mean, really. Four women doing any movie on earth will destroy your childhood?” She shrugs. “I have a visual of those people not having a Ben [Falcone, her husband], not having friends, so they’re just sitting there and spewing hate into this fake world of the internet. I just hope they find a friend.

There you go. The angry people on the Internet need friends. What a novel idea. We’ve been going about combatting the incessant bad attitudes paraded around online all wrong for years, guys.