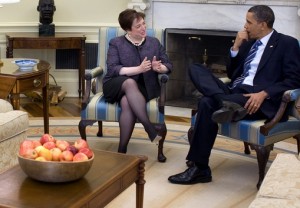 This should be fun. In a commencement address at Virginia’s Hampton University yesterday, President Obama fed meme-hungry media types the kind of quote they can really sink their teeth several millimeters into. The NY Post already has the President “declaring war on technology,” and Fox News says he “Warns Grads of iPad Peril.” The combination of über-pop-buzzword “iPad” and lightning-rod POTUS is almost irresistible, with even the Huffington Post missing the point of what Obama was really saying.

They’re seizing on this statement by the President, and interpreting it as an Apple slam:

And with iPods and iPads; and Xboxes and PlayStations — none of which I know how to work — (laughter) — information becomes a distraction, a diversion, a form of entertainment, rather than a tool of empowerment, rather than the means of emancipation.

What they’re missing, of course, is the preceding sentence. Here’s the full quote:

And meanwhile, you’re coming of age in a 24/7 media environment that bombards us with all kinds of content and exposes us to all kinds of arguments, some of which don’t always rank that high on the truth meter.  And with iPods and iPads; and Xboxes and PlayStations — none of which I know how to work — (laughter) — information becomes a distraction, a diversion, a form of entertainment, rather than a tool of empowerment, rather than the means of emancipation.  So all of this is not only putting pressure on you; it’s putting new pressure on our country and on our democracy.

He wasn’t slamming the iPad, but rather the content of dubious truth-metering that is available on it.

Mediaite’s Glynnis MacNicol isolated one valid takeaway, that the President warning college grads about new media signal-to-noise sounded a little bit out of touch. Personally, I’m worried about these people who get their news off of the Xbox. Maybe that explains all the gun rallies, they’re tooling up for the imminent God of War attack.

What’s funny is that I was just wondering if President Obama has some kind of apple obsession. I mean the fruit, not the iStuff producers. When the White House released this photo of the POTUS and Elena Kagan this morning, with a bowl of what appear to be McIntoshes in the foreground, it reminded me of the towers of green apples that adorned every table at last year’s Father’s Day barbecue. Note to Sarah Palin: Is this all part of his plan to “keep the doctor away?” Wheels within wheels, man. Wheels within wheels. 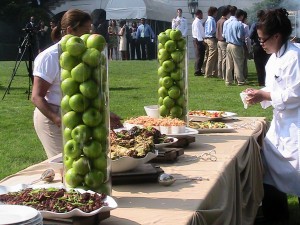