Michael Moore: I Am The 1% | Occupy Wall Street

Michael Moore Caves, Admits To Being Part Of The 1% 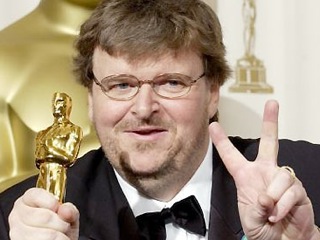 Last Tuesday, communist* filmmaker Michael Moore made a very bizarre declaration on Piers Morgan Tonight: despite being an Academy Award-winning filmmaker, he refused to claim he was part of the “1%,” a number used to dehumanize the top tier of America’s breadwinners. With his disdain for the higher classes so public, he wrote a blog post on his website explaining how he got there and what distinguishes him: unlike many of his peers, he was dedicated to making money off of labor, and not money off of money.

In a post entitled “Life Among the 1%,” Moore told the story of how he happened upon his millions when he sold his independent documentary film, Roger & Me, to Time Warner. Having sold it for three million dollars, he narrates, he spent much of that money on giving back to his community and paying taxes, not before paying his debts, helping his family, and buying some property. Stocks, he maintained, were an evil “casino, and so he abstained from investing there: “I believed the concept of making money off your money had created a greedy, lazy class who didn’t produce any product, just misery and fear among the populace.” None of this is news, though the fact that the 22nd anniversary of selling Roger & Me is only a few weeks away is pretty astonishing.

RELATED: Michael Moore Refuses To Admit He Is Part Of The 1% To Piers Morgan

The meat and potatoes of the piece comes further below, however, where Moore explains how his success has nothing to do with capitalism, and how he could so vehemently pursue the interests of a class to which he has not belonged in decades:

I do very well — and for a documentary filmmaker, I do extremely well. That, too, drives conservatives bonkers. “You’re rich because of capitalism!” they scream at me. Um, no. Didn’t you take Econ 101? Capitalism is a system, a pyramid scheme of sorts, that exploits the vast majority so that the few at the top can enrich themselves more. I make my money the old school, honest way by making things. Some years I earn a boatload of cash. Other years, like last year, I don’t have a job (no movie, no book) and so I make a lot less. “How can you claim to be for the poor when you are the opposite of poor?!” It’s like asking: “You’ve never had sex with another man — how can you be for gay marriage?!” […]

Exactly — [Kanye West]’s down there demanding that his taxes be raised. That, to a right-winger, is the definition of insanity. To everyone else, we are grateful that people like him stand up, even if and especially because it is against his own personal financial interest. It is specifically what that Bible those conservatives wave around demands of those who are well off.

Honesty suits Moore well. While “um, no” doesn’t quite explain how capitalism isn’t directly responsible for Moore’s success– try filming the equivalent of Roger & Me about the exploitation of manual laborers in China– his position is far better represented by the idea that, having come from a modest background, he has not forgotten the plight of those around which he grew up, and that plight directs his cause. Nothing hurts a cause more than those being courted having their intelligence insulted the way most Americans felt with Moore flat-out lied and said he wasn’t part of “the 1%,” and nothing quite helps it like a frank explanation of where the ideas fueling it come from that treats said audience like adults.

There is an additional fascinating element to his explanation: Moore admits religion plays a role in the way he understands politics in a way Americans are only accustomed to seeing on their right. A statement like “the Bible says I should do XYZ” is a surefire way to sink a political career in many parts of the country; no informed American likes collusion of church and state. Liberals, particularly, shirk away from shameless declarations of faith. It’s a smart move on Moore’s part, though, of course, one that comes with several reservations. For one, if the Bible is the launchpad for Moore’s belief system, how does he explain the near 100 million deaths and “disappearances” socialism/communism have caused around the world? We need not even go that far– how does Moore explain the fact that Marxists governments universally ban the practice of religion by their subjects? Whatever happened to “religion is the opiate of the masses?”

RELATED: Michael Moore Warns: OWS Is Not Concerned With Candidates Or Voting To Make Change

Needless to say, this statement gets Moore nowhere with most Americans who understand the way capitalism functions and are grateful for having been born in the best of all known political systems. But it does bestow upon Moore– an easy figure to revile, possibly intentionally– a humanity and clarity of thought that has been woefully absent since he became one of the recognizable leaders of the Occupy movement. The PR gods certainly smile upon Moore’s somewhat sulky admission that being rich is nothing to be ashamed of. It gets better from here.

*Let’s not kid ourselves here. Addendum: the term “communist” is not in any way meant as an ad hominem attack, but merely an accurate representation of Moore’s beliefs as he has articulated them. From the website of the Communist Party, USA:

The Communist Party stands for the interests of the American working class and the American people. It stands for our interests in both the present and the future. Solidarity with workers of other countries is also part of our work. We work in coalition with the labor movement, the peace movement, the student movement, organizations fighting for equality and social justice, the environmental movement, immigrants rights groups and the health care for all campaign.

But to win a better life for working families, we believe that we must go further. We believe that the American people can replace capitalism with a system that puts people before profit – socialism.

We call for nationalization of the banks, railroads, and industries like steel and auto. Everyone who wants to work should be guaranteed a job or get unemployment payments until she/he can find a job. We say put the unemployed to work at union wages on massive public works programs to rebuild our cities, provide affordable housing for the homeless, build mass transit, and clean up the environment!

These views appear consistent with ideals that Moore has repeatedly expressed in the past. They are not inherently evil or anti-American, and to insinuate as such is an insult to many patriotic Americans who identify with communist values.