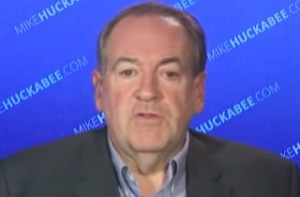 He may be a Southern Baptist minister, but Mike Huckabee appears to have lost the side skirmish for evangelical hearts and minds to the likes of Ted Cruz, Ben Carson, and — improbably — Donald Trump. And he isn’t taking the news well.

As the ten-day countdown to the Iowa caucuses begins, Huckabee is polling an unimpressive 7th place in that state, according to the most recent Des Moines Register poll. Lately, the former Arkansas governor has been lashing out against his Republican rivals and GOP donors, attributing his poor standing in the race to the fact that he’s too conservative for the party’s taste.

I'll never play political games with my faith. We shouldn't say one thing for votes, and another for NYC money.
https://t.co/w44of59oWq

I’ll never play political games with my faith or say one thing for votes and another for campaign cash. #ImWithHuck #IACaucus

I’ll never apologize for my faith, compromise my values, or say one thing for votes and another for campaign contributions.

While some pandering policiticians believe life, marriage and moral issues are ‘not a priority,’ I disagree 110 percent.

This has been Huckabee’s tack since the Religious Right largely turned its back on him in favor of Sen. Cruz. Speaking to Fox News host Todd Starnes on his podcast two weeks ago, Huckabee explained his poor standing within his party was partially due to the fact that prominent evangelical leaders and Christian organizations lacked his earnest religious conviction, opting instead to “go the way of convenience and go the way of cash.”

Huckabee described how devotion to the bottom line had won out over principle, explaining that his staunch positions on social issues had cost him support from establishment Republicans who need to keep these contentious issues alive in order to fundraise.

Reiterating his commitment to abolishing abortion and his intention to “ignore the Supreme Court’s same-sex marriage decision,” Huckabee explained that his triumphs on social issues would cost Christian organizations the ability to “gin up support” and raise contributions.

“If we slay the dragon,” he asked, “what dragon do they continue to fight?”