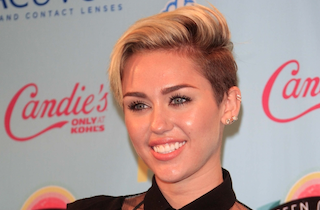 Miley Cyrus was one of the first celebrities to speak out against Indiana’s religious freedom law––calling Governor Mike Pence an “asshole”––and today she talked more about it in a conversation with Time Magazine.

Cyrus told Time she lives her life by “being whoever it is that I want to be,” and supporters of the Indiana law aren’t living that way, which means “you’re not going to last in this generation because we are overtaking you.”

“They are dinosaurs, and they are dying off,” she said. “We are the new generation, and with that will come so much.”

Cyrus also pointed to a message she posted on Instagram earlier, in which she mocks the conservative outrage over “big bad liberals”:

In honor of #transdayofvisibility say #fuckdatshit to Indianas #RFRA It is unevolved & unjust! You may hear that this bill isn't what the big bad liberals are making it out to be! That this isn't a discriminatory act it is just to protect the "consciousness" of Christians! To judge anyone for how they want to express themselves or their love to another human is WRONG no matter how these fuckers sugar coat it! THE BIBLE SAYS (if that's what we are realllllly basing a 2015 bill on) "the way that you judge others will be the way that you will be judged" Which I hope is just as harshly and unfair as those apart of Indiana's LGBT community! The fight for freedom isn't over! I won't give up!